‘Pixel Ultra’ Fact Check: Sorry, but none of these ‘leaks’ show a third Google Pixel 3 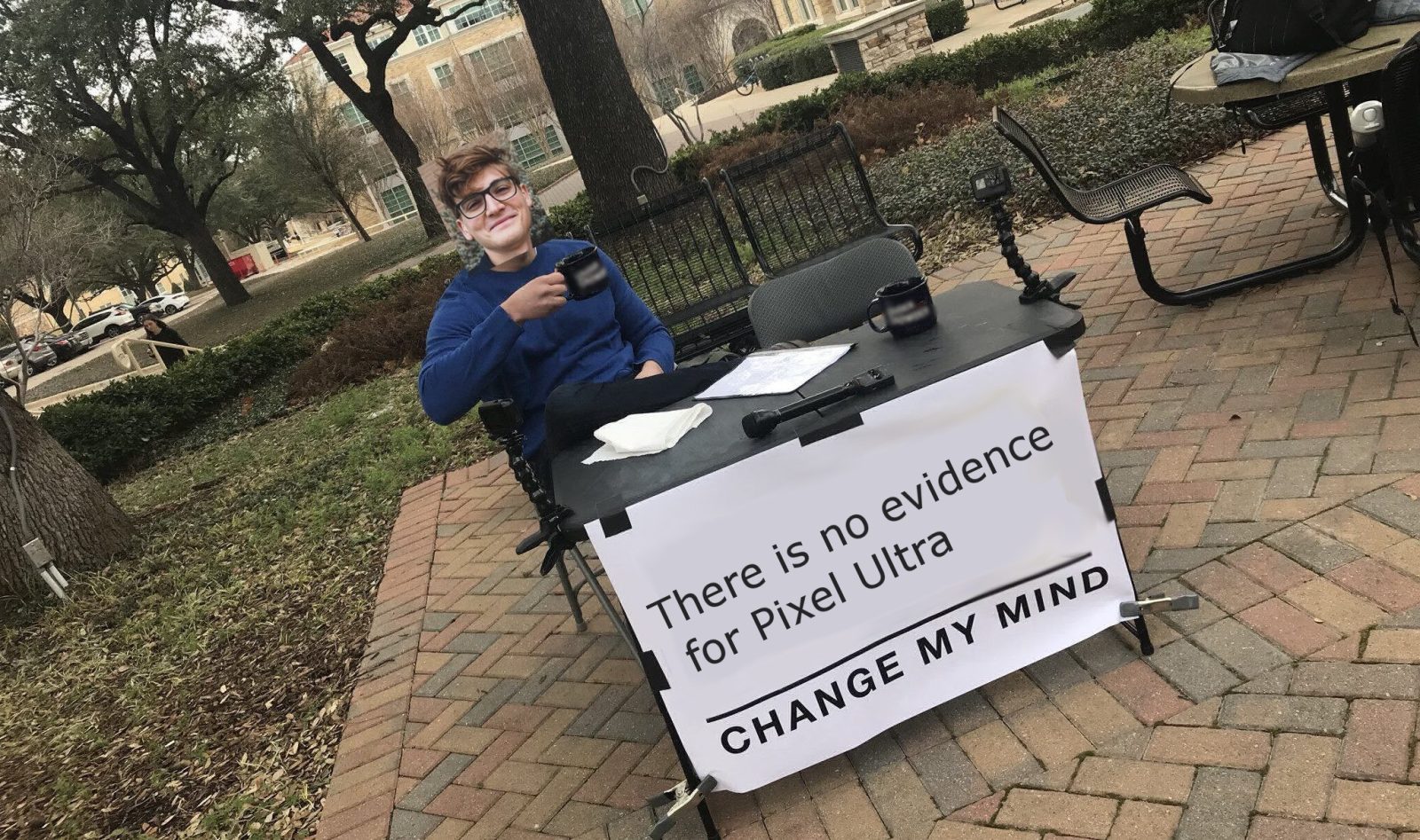 This year has seen a whirlwind of leaks in the Google phone space. As you know if you’ve been following along with our extensive coverage, we know pretty much everything there is to know about the Google Pixel 3 and Google Pixel 3 XL, both set to be announced next month at Google’s October 9th event. But given an ever-spreading wildfire of distaste toward the bigger model’s large notch and plenty of misleading information, the “Pixel Ultra” speculation just hasn’t stopped.

While it’s impossible to put the rumors in their coffin for good until October 9th, we can round up everything that everyone has called a “Pixel Ultra” so far and write them off one by one…

Given the subject matter, I thought it’d be smart to kick things off with the “leak” that started it all. This you see here is the original “Ultra pixel” that showed up in the days prior to last year’s Google event. (As you know, that name has since been twisted to be “Pixel Ultra,” the same name that Google used when it made fun of the “Ultra pixel” rumors on stage last year.)

Now let me be completely clear: This one is a complete fake. Like, not just a bad photoshop job or a mistake or a fuzzy image of a real phone. This was an intentional fake by a pretty savvy graphic artist. It was a promotional stunt. And it worked out really well for him. 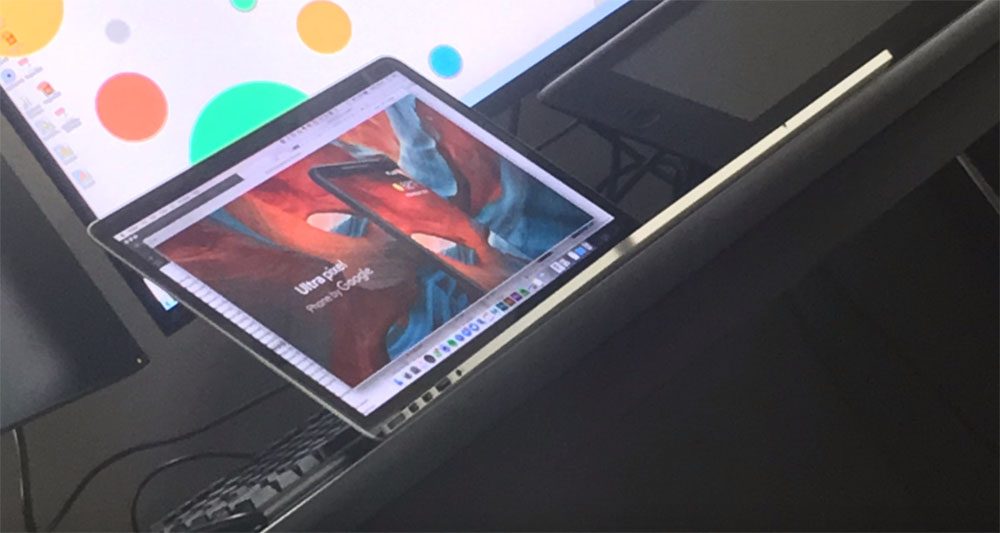 How we know it’s not a Pixel Ultra: The guy who made it said so. Also, Google’s Made by Google 2017 event came and went, and as we expected, they launched the Pixel 2 and Pixel 2 XL.

One of the first “Pixel Ultra” renders that popped up — which has been used on many articles talking about the likely-nonexistent “Ultra” phone — was this one published by Ben Geskin in May 2018. Admittedly, it’s one of the prettier renders of the Google phone we all want to be real.

Unfortunately, this one was posted right after it was discovered that there was a bezel-less phone used a placeholder image in Android P. I wrote at the time that, while the render wasn’t meant to represent the Pixel 3, it might end up looking like it anyway. Unfortunately, we know better than that now, and all credible evidence points to there being only two phones, neither of which look like this.

How we know it’s not a Pixel Ultra: Ben Geskin is an artist well known for his smartphone renders, and that’s all this is. It’s a render based on a render Google included in Android P.

The ‘Make Google do it’ ad

Another “Pixel Ultra” leak that made the blog rounds this year was this official Google advertisement. In the video, you get a glimpse a Pixel 2 XL. Yes, it appears to have very small bezels akin to the other “Pixel Ultra” bezel-less devices, but that’s not what you’re actually seeing here.

How we know it’s not a Pixel Ultra: Because this is a very obvious example of a sloppy effects job. The screen of a phone like this caught on camera from this angle would be essentially impossible to discern, so the maker of this video overlaid an image on top of a real Pixel 2 XL in post.

Also, this video has been live on Google’s UK YouTube channel for months, and they would have pulled it — as the company always does — if it were indicative of a future product. Google’s not worried about that, because speculating that this is anything of substance is silly.

There’s yet another example of this with the Madden 19 commercial. This commercial showed what is very clearly a Google Pixel 2 XL on the back, and then flipped around the show the front. That front looked pretty bezel-less, so many jumped to the conclusion it was an unannounced phone.

How we know it’s not a Pixel Ultra: I’ll just quote a Redditor on this one. “It’s almost like they can just put anything on an existing phone’s display in post editing to show what they want. /s”

The bottom picture looks exactly like a Pixel 2 XL. The top picture looks like the phone image was inserted with CG, because there’s no room in the bezels for the front-facing camera, or speaker, or any of the stuff you’d find in the top bezel of a smart phone.

These two Redditors are exactly correct.

Adding displays on top of real phones in post makes a lot of sense and happens a lot because screens often don’t look good on camera. Add to that the fact that Madden hasn’t pulled this video from the web, and you have yourself a sure-fire case of post-edit illusion of an unreleased phone.

Next up we have a pair of ads that many thought might show some new Google hardware. These actually first surfaced because someone noticed the smaller bezels on the Pixelbook — a fact about the next Pixelbook that we actually know is likely to be true, even though these are fake.

Painfully, though, some have pointed at the device sitting on the table next to this supposed Pixelbook as yet more evidence of a bezel-less or unannounced or un-leaked Pixel device.

How we know it’s not a Pixel Ultra: Similar to the video from the UK YouTube channel, the phone you see here is the victim of a poor photoshop job. For whatever reason, the displays on these devices didn’t look good enough for the ad, so overlays were sloppily added.

This is one of the more contentious ones. Someone spotted a device at a — likely very real — Pixel 3 video shoot in LA, and posted it on Reddit and shared it with a YouTuber claiming that it’s an unannounced Pixel phone. Unfortunately, none of the photos that they provided have been convincing.

The best shot we got was this blurry one showing the phone from a weird angle through what appears to be a glass window of some sort — causing all sorts of blur and other issues.

The most interesting and convincing thing about this leak has been the circumstances rather than the photo of the phone itself. There is substantial evidence that this photo was taken at the real site of a real Pixel 3 marketing video shoot, and the phone is hooked up to a computer that the original poster alleges was being used to edit footage taken on the Pixel 3. 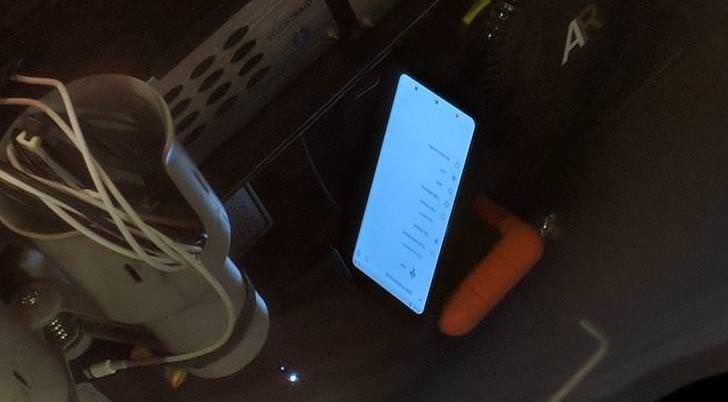 How we know it’s not a Pixel Ultra: Honestly, of everything we’ve seen so far, this is the one that is hardest to conclusively debunk. But we can try anyway, and I’ll let you reach your own conclusion.

Upon closer inspection, this is likely to just be a Pixel 2 XL. Some have lightened up the image to show where the edges of the case end and begin, and when you do that, it starts to become clear. I think the top bezel is obvious, and the bottom bezel being invisible is simply an illusion due to glare or the darkness of the photo.

(Actually, in the image to the right, you can even see where the USB-C cable enters the phone, which seems to show a large bottom bezel clearly.)

If you don’t want to believe me, though, the best analysis I’ve found is that of this Redditor, who made a nifty gif comparing the screen aspect ratio with a screenshot from their Pixel 2 XL:

As you can see, the screen content lines up perfectly, so it’s actually the same 18:9 aspect ratio as the 2XL. If it were any taller, there would have been some additional whitespace at the bottom of the screen in the pictures and my screenshot would have been stretched when I lined up the edges

I’m open to being proven wrong, but I think this one is case closed. Add to that the fact that I’ve been in touch with a source who saw devices at another Pixel 3 marketing video shoot in LA. They told me that the only devices they saw were the Google Pixel 3 and 3 XL you’re familiar with.

I understand that the person who took these feels very strongly that it’s not a 2 XL — I’m just sharing my opinion here based on the evidence.

That’s it… for now

In conclusion, I’d be happy to be proven wrong and I’d love to see Google pull some “surprise and delight” out of its hat. I’m not a fan of the notch in general, and I agree with a lot of the criticism that these two phones are a bit boring in some ways. But just because something is boring doesn’t mean we should try and force something less boring into existence without substantial evidence.

That’s especially the case when there’s plenty of evidence to the contrary. Just for one of many examples, Bloomberg, which has one of the best track records in the industry, is only aware of two phones launching this year. Evan Blass, who basically hasn’t missed a phone leak in years (and had the scoop on both of the first two Pixels, if I remember correctly), is only aware of two phones.

That’s not to say it’s impossible that a third phone exists. In fact, I’ve heard myself that Google considered launching a third phone this year at one point, and that there’s already prototypes of next year’s phones floating around internally too. Google’s got more phones. They always do. But decisions for next month’s event have already been made, and we have good evidence of what they are.

This has been the leakiest phone season for Google, possibly ever, and there’s no convincing evidence it was all a marketing stunt. I don’t think Google was happy about the notched Pixel 3 XLs managing to escape its grasp and be sold on the black market. I think they, just like any other tech company, would love to be able to introduce their phone themselves and tell its story their way.

I do think, however, that Google has a plan to justify and explain the all-too-controversial notch at its event next month. And I think we’ll all find ourselves surprisingly happy with the two phones — the real Pixel 3 and 3 XL — that Google actually is planning to launch. I, for one, am exited for the leaked ones.