Exclusive: This is the Google Pixelbook Go [Gallery] 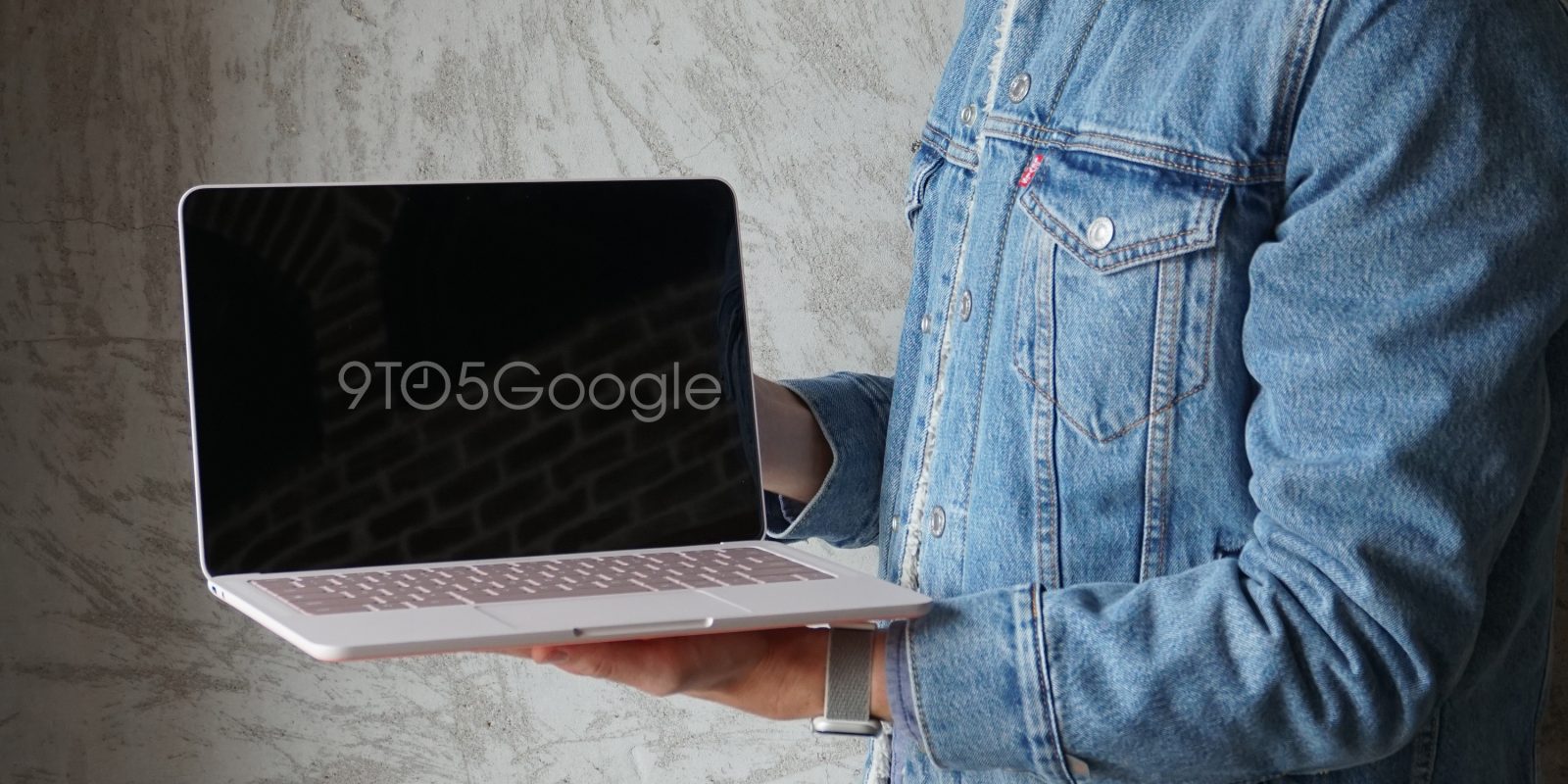 We told you everything there is to know about the Pixelbook Go last month, but now we’ve got the goods. Thanks to a source we trust, we’ve now had a chance to go extensively, fully, completely hands-on with the Google Pixelbook Go. Here’s some thoughts on the hardware design and aesthetic, and some broader ideas about just how excited you should be about the newest Google laptop.

The first thing that will strike you about the Pixelbook Go is its unique, grippy, ribbed back. As we mentioned in our report last month (our source told us it has a “tactile feel”), the Pixelbook Go has an interesting bottom case that makes it feel nice in the hand. It also looks nice — it gives the Pixelbook Go a unique aesthetic that immediately feels at home with Google’s other products.

How does this bottom actually feel? Well, it’s really weird for a laptop. But it’s also good. You can probably get a sense of it by looking at the images below, but it’s a ribbed texture that feels somewhat similar to a washboard or the roof of a dog’s mouth. The coral-esque color fits in perfectly with the “Not Pink” aesthetic of the Pixel 3, and I have a feeling it will look right at home next to the Oh So Orange Pixel 4 as well. 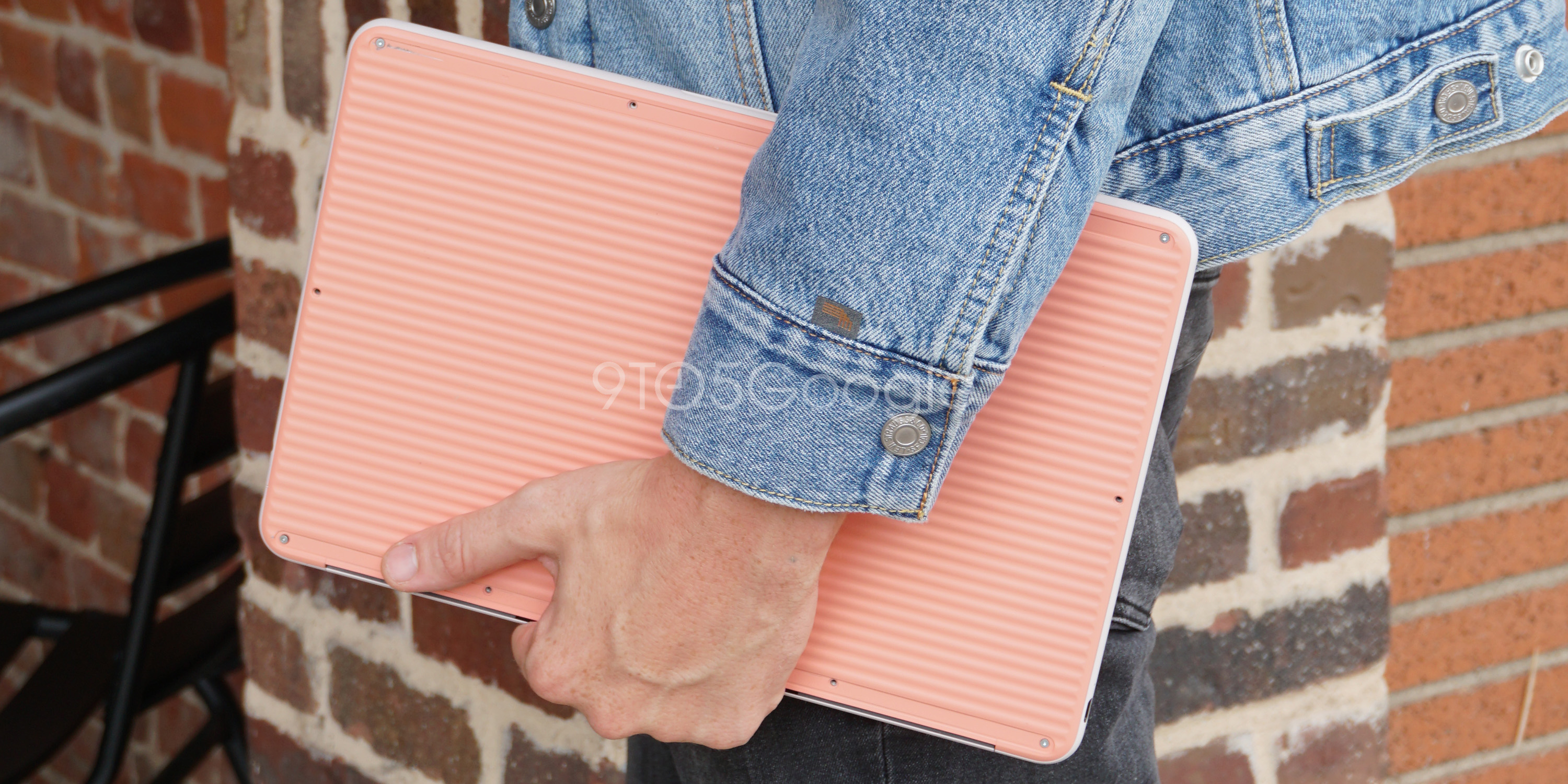 The next thing you’ll note when you first get your hands on the Pixelbook Go is its smooth, matte finish on top. This model, the “Not Pink” model that we told you about last month, has what appears to be a painted on coating similar to that of the Pixel 2 and Pixel 2 XL. It feels a bit smoother to the touch than that one did — almost as smooth as the matte glass finish on the back of the Pixel 3 and 3 XL. That’s about the best I can describe it for now.

While the color on the bottom is certainly pronounced, the “Not Pink” rings true to its name on the top. As you can see in the photos below, the lighting, camera angle, exposure, and other factors can change how much that “pink” shines through. Just like the Pixel 3 and Pixel 3 XL, the color is subtle. I like that, though — it really does make this model accessible to anyone regardless their personal taste.

As you can see in the images below, the prototype Google Pixelbook Go that we got to check out has a placeholder logo where the “G” logo is going to be: 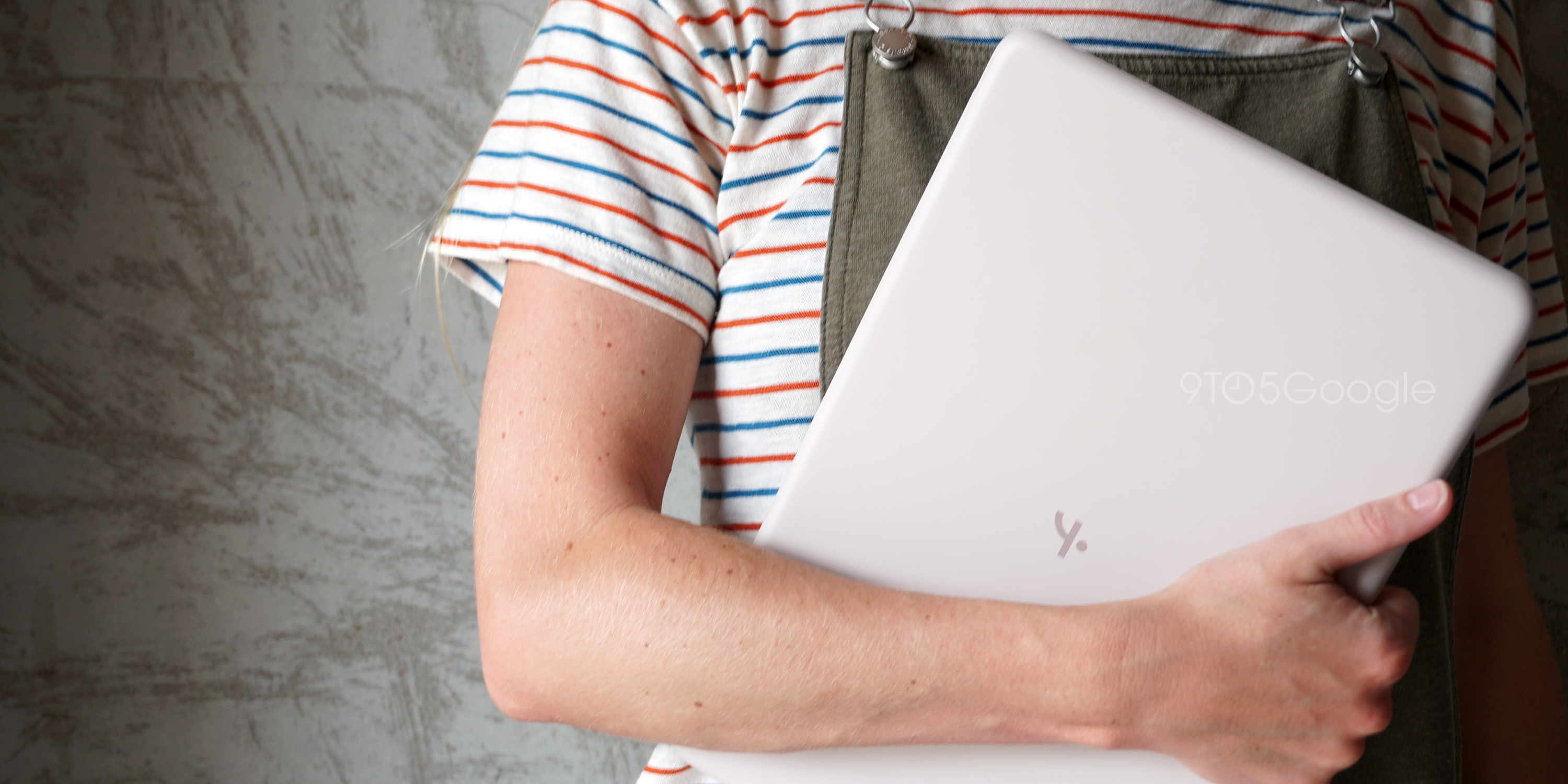 Elsewhere on the outside of the laptop, you’ll find some interesting ports and design choices that might look familiar to you. Side by side with the “Not Pink” Pixel 3, you might not even be able to tell a difference when you look at the USB-C port on the left side. There is one thing that the Pixelbook Go has that will make it stand out compared to Google’s flagship smartphones, though, and that’s a 3.5mm headphone jack. This sits next to the USB-C port and charging LED on the left side, while the right is flanked with another USB-C port. Like I said, lighting conditions can really change how this thing looks — the two photos below are the same laptop from different angles:

When you open the lid up, you’ll get your first look at a view that might look a bit familiar. Google will certainly try to tone down this comparison next week, but we can’t fathom that this laptop won’t immediately be labeled “Google’s MacBook”. But before the most obvious comparisons can be made, let’s take a look at the top half. There’s a camera (2MP, as we previously mentioned) up at the top of the display, two far-field microphones for picking up “Hey Google” hotwords, and a large 13.3-inch display (this one’s Full HD). 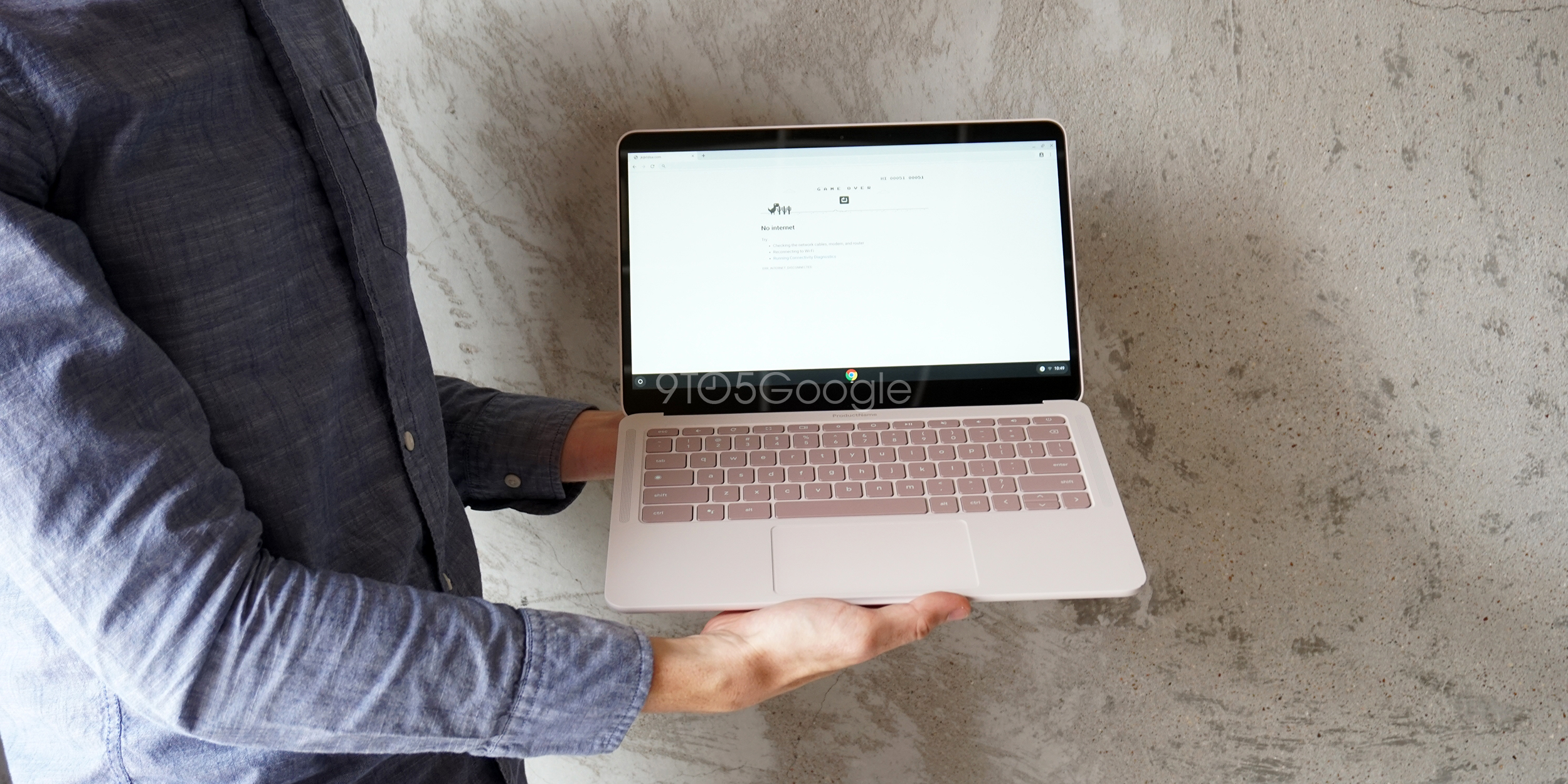 Looking down to the bottom half of the device, we have the famed Google Pixelbook keyboard (spoiler: this one is just as good or better than the first Pixelbook), a pair of front-facing speakers (double spoiler, they sound great and way better than a 2016 MacBook — we compared them in the video below), and the trackpad. The trackpad isn’t as praiseworthy, but it’s not shabby at all based on our initial impression. It’s a traditional “diving board” trackpad and seemed sufficiently responsive and clicky in our tests of this prototype. We’ll take a closer look at the production units at the event next week.

There’s nothing all too surprising about the keyboard here — you’ll find an Assistant key in the bottom-left side, the usual home button where the caps lock key is on any other keyboard, and the usual row of Chromebook keys on the top. Like I said, this keyboard feels great to type on. As is to be expected, I think the closest to how this feels is the first generation Pixelbook. Based on a few hours with it, it’s clear Google decided not to break what wasn’t broken. 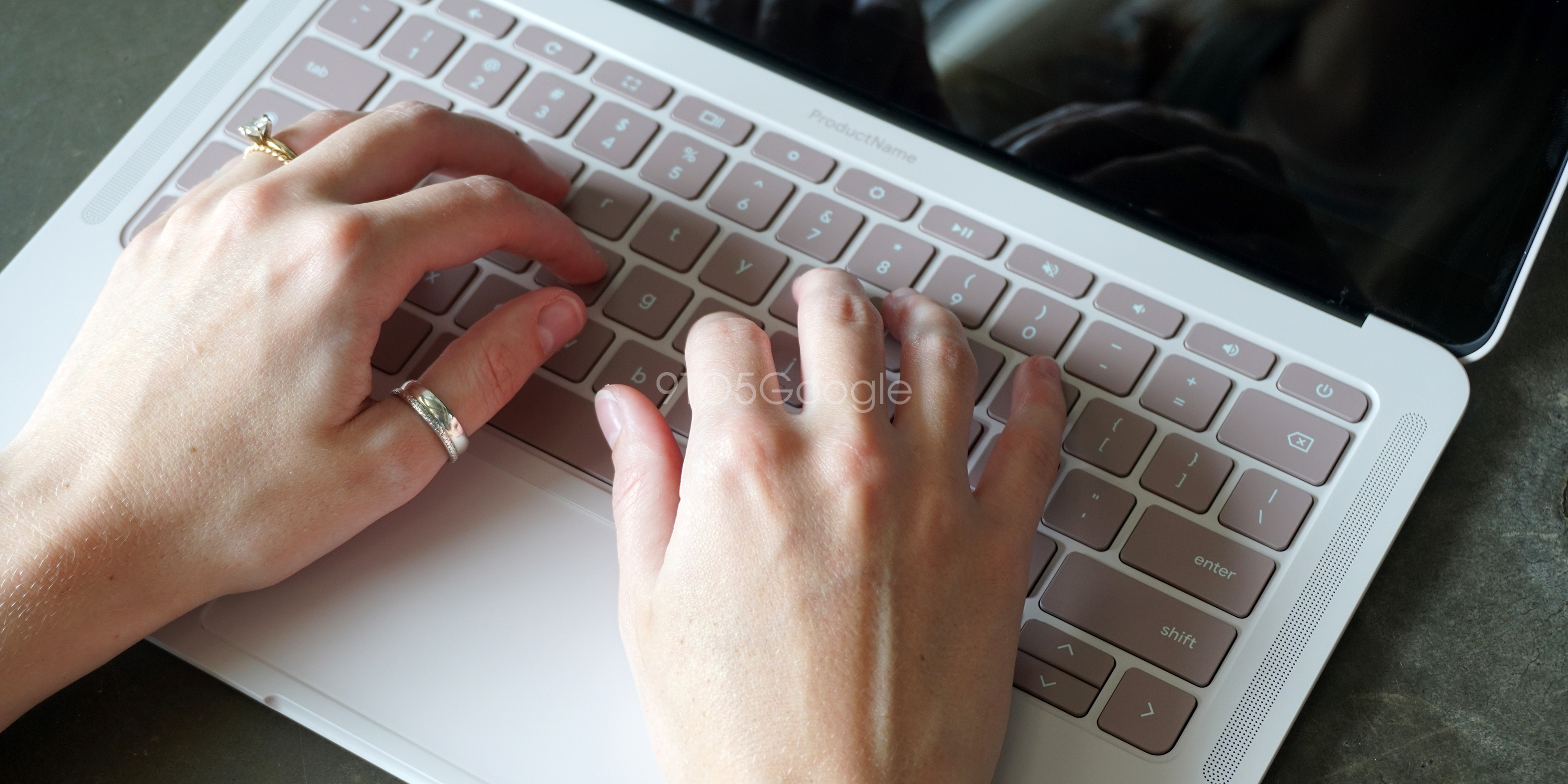 What’s inside the Pixelbook Go?

Similar to the Pixelbook and Pixel Slate that came before it, the Pixelbook Go will be available in a variety of tiers, across a wide spread of prices, separated by processing power, RAM, and in this case, display type. This particular model was a Full HD, Intel Core M3, 8GB of RAM model, making it the lowest-end option. Options will go up from there all the way to an Intel Core i7 with 16GB of RAM, 256GB of storage, and a 4K “Molecular Display”. 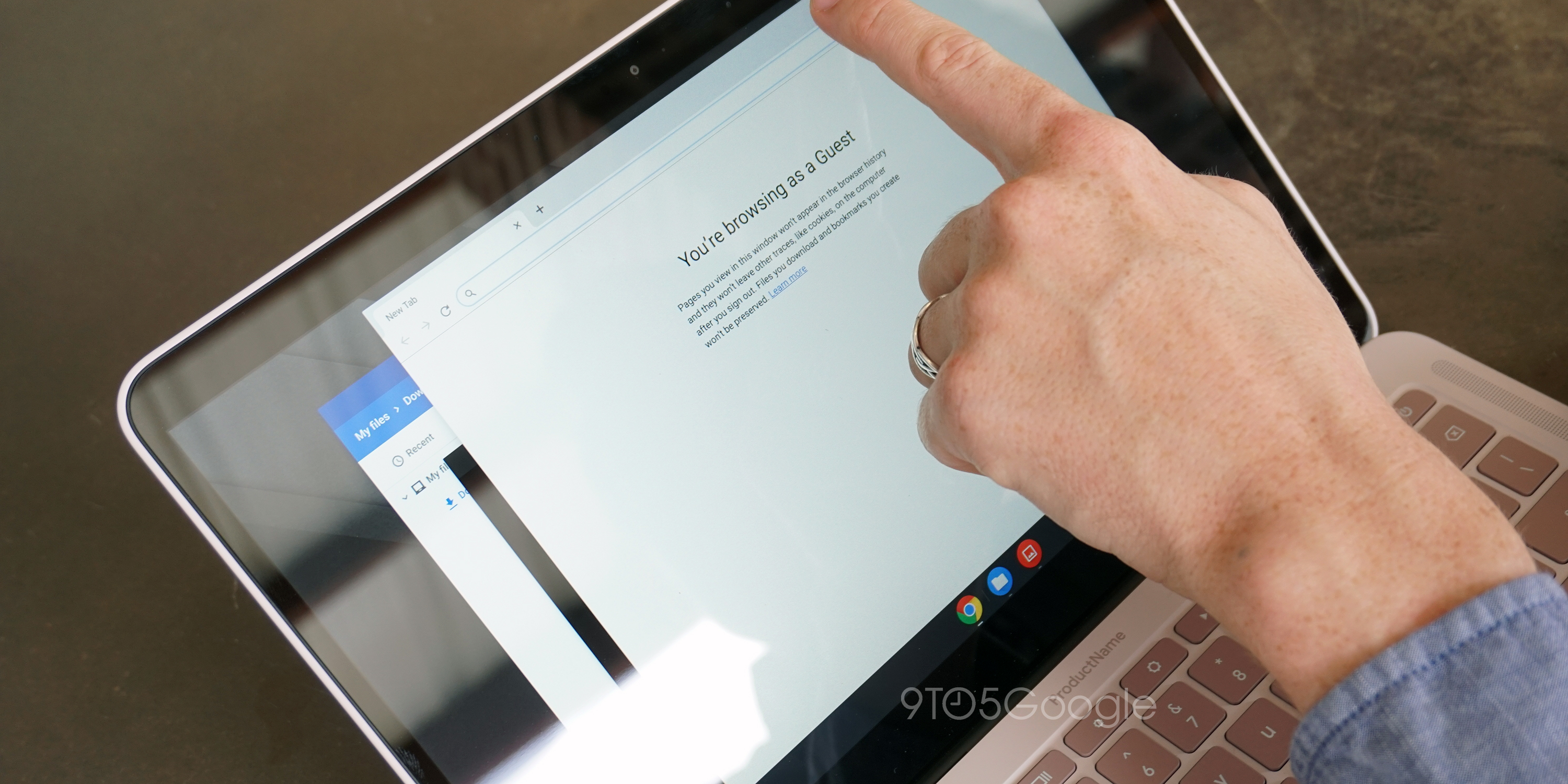 Here’s the full breadth of specifications your Pixelbook Go might have, depending on how you configure it:

Pixelbook Go is not the only device Google will announce at its 10/15 event in New York City next month. We’re also expecting the company to show off the Pixel 4 and Pixel 4 XL, a 2nd generation of its Nest Mini smart speaker, a new Nest Wifi, and more. Be sure to check out our full roundup for all the details as they unfold.