Google ‘Launch Night In’: Here’s everything we expect for the Pixel 5 event [Video] 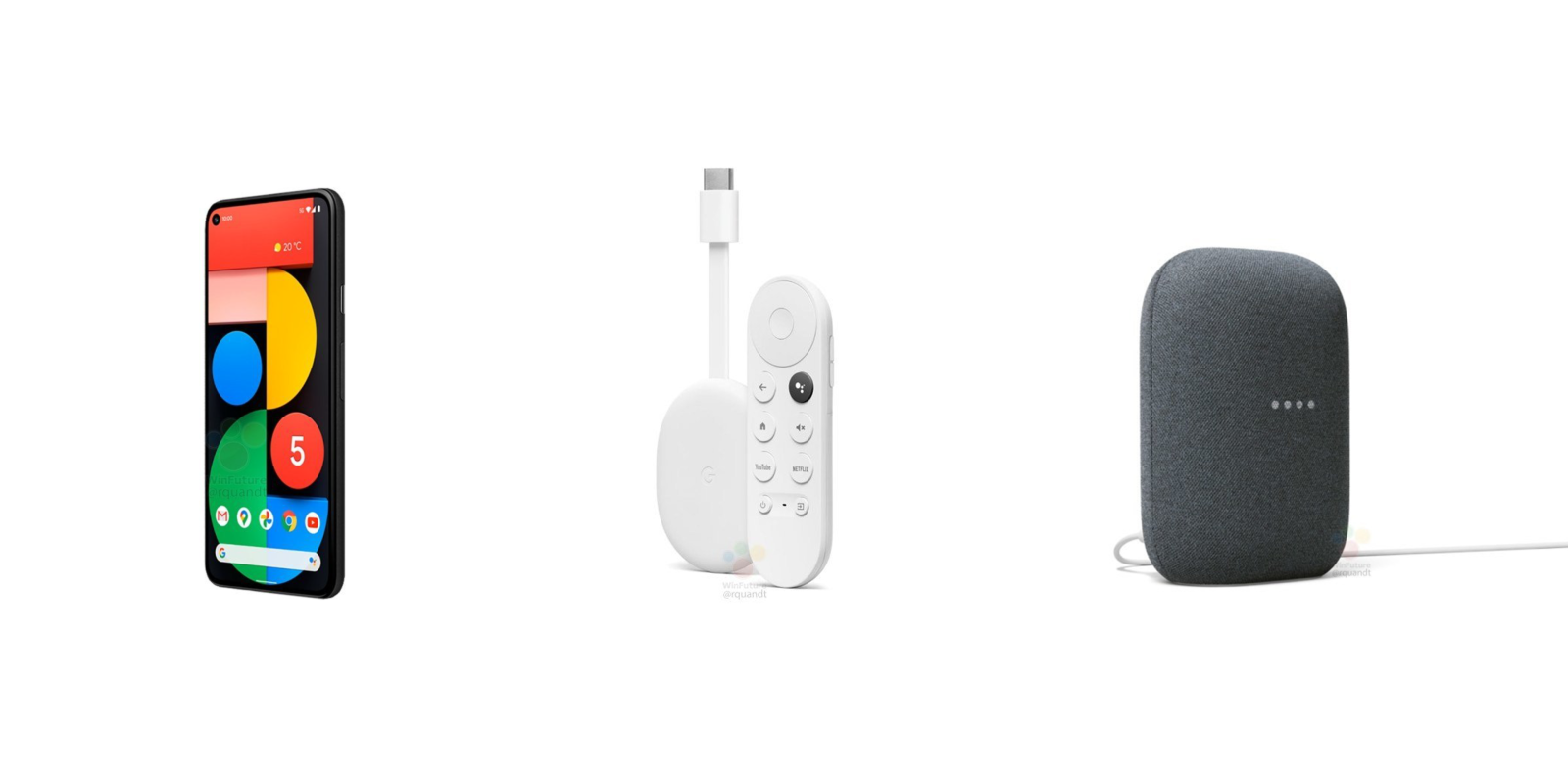 We’re less than a week away from what would likely have been called “Made by Google 2020,” or the “Launch Night In” as Google is now calling it. For Pixel fans everywhere, we’re sure that excitement is building for the event, where Google is expected to unveil its latest flagship smartphone, the Pixel 5.

As has been the case every year previously, Google is set to show off far more than just a smartphone (or smartphones). Google itself has flat out confirmed that it will unveil the latest Pixel phones, its latest smart speaker, and a new Chromecast. Could we see some interesting additions? We’re not exactly sure, but we’re still very excited to see some of the hardware in the flesh.

We’ve collated all the major tidbits and teasers into one cohesive, easy-to-digest serving of everything we expect to be unveiled and announced during the Pixel 5 launch event.

Google’s flagship smartphone is the most obvious announcement lined up for the September 30 “Launch Night In” event. We think we already know a solid amount about the upcoming smartphone, but in reality, the hands-on leaks this time around have been few and far between compared to previous years.

As we have discussed over the past few weeks, those wanting a proper out-and-out flagship may leave bitterly disappointed this year. The Google Pixel 5 is set to come with an upper mid-range chipset and relatively modest internals compared to the competition.

So here’s the lowdown on what the Pixel 5 will be packing: a 6-inch 90Hz display FHD+ display at 432ppi, 8GB of RAM, 128GB of storage, a 4,080mAh battery with standard and reverse wireless charging, a rear fingerprint scanner, at the rear we’ll see a dual-camera setup.

For the first time on a Google Pixel device, the Pixel 5 will launch with an ultra-wide 107-degree FOV rear camera, alongside a main “wide” lens. The front-facing selfie camera will be hidden within an upper-left punch-hole notch – we’d expect it to be in the 8-megapixel flavor. It will also likely come with some sort of Pixel Visual Core chip, ships with Android 11, and will come with the standard three years of support.

Recent leaks have the European pricing at €629 for the Pixel 5, which is around $740 when exchange rates are factored in (but that doesn’t mean that’s the price, as we’ve seen with the Pixel 4a and other phones). The same retail listings have hinted that we’ll see the Pixel 5 in green and black.

Because there is no XL version of the Pixel 5 set to launch alongside the smaller version at this Launch Night In event. It’s a strange year for the Pixel because this larger model is, in fact, part of the Pixel 4a line. That means this other smartphone will come with a lower price-tag, but for some reason, it will have a familiar spec sheet to the more “premium” Pixel 5.

The 5G-enabled Qualcomm Snapdragon 765G chipset is an important inclusion as it provides 5G connectivity without the associated price premium. The Pixel 4a 5G will come with 6GB of RAM and 128GB of internal storage alongside a 3,800mAh battery.

The 6.2-inch display on the Pixel 4a 5G is likely to have a 60Hz refresh rate, while we’d imagine it will also be capped at FHD+ rather than a high refresh rate FHD+ panel. It may also have slightly larger bezels but the edge-to-edge display will at least match that of the Pixel 4a.

It too will include a rear fingerprint scanner and the same dual-camera setup as on the — likely — more expensive Pixel 5. So unlike the Pixel 4a, the Pixel 4a 5G will prove to be quite a step up over its affordable stablemate.

Like the Pixel 5, the 4a 5G will ship with Android 11 and undoubtedly come with three years of OS upgrades — getting it up to Android 14. It will come in two pretty basic colors: black and white. Pricing is set to be very competitive at a confirmed $499. This should make the Pixel 4a 5G a really compelling option for many people out there.

Another product definitely coming at the Pixel 5 event is a new generation Google Nest Speaker. This is more of a follow-up to the original Google Home speaker with hints of the Google Home Max design and functions. Of course, Google’s previously-announced rebranding efforts mean that this next speaker will carry the “Nest” branding.

It’s a familiar design that was even teased by Google themselves. Imagine a slightly more bubbly version of the Home Max. Instead of being played in landscape orientation, the new Nest speaker is designed to be placed in portrait orientation. While the bottom right corner is home to the power plug and white cable, which should be removable.

Everything is covered by a fabric covering, and we today see the very standard “Charcoal” (dark gray) and “Chalk” (light gray). Other colors we’re expecting include a pink/sand that’s like the Pixelbook Go and a light blue.

We’d expect some audio upgrades over the original Google Home speaker on the Nest Speaker, which might be pretty obvious. However, we really don’t know how the new Nest Speaker will sound until we get hands-on with one in the coming weeks/months.

The true follow-up to the Chromecast Ultra is codenamed “Sabrina” and will finally include a remote that isn’t your smartphone. While we love the Chromecast and its current control scheme. It’s a thoroughly basic streaming device that maybe isn’t quite as intuitive to some people simply as it doesn’t really have an interface.

We saw a refresh of the original Chromecast back in 2018, with a slightly updated “bubbly” design and true 1080p 60fps video playback support. Since then nothing has really changed in the Chromecast lineup — save the discontinuation of the Chromecast Audio.

Beyond the Pixel 5 and Pixel 4a 5G, the new Chromecast is arguably the most anticipated device launching during the 2020 Made by Google event. We’ve been crying out for a real competitor to the Amazon Fire TV stick and even the modest Roku TV dongle. Integrated Android TV and packing in that remote will likely be enough to give the Chromecast wider appeal.

On top of that, the pricing looks like it will be very competitive. Leaked retail listings have the price of the Android TV-powered Chromecast at between $50 to $60 — which feels like an absolute steal. This might be the sleeper hit of the entire Pixel 5 launch event as a result of the pricing.

Possibly coming at the Pixel 5 event

Last year, Google took mesh Wi-Fi networks to the next level by having access points that double as tiny Google Assistant speakers. This did mean a price-premium for the Wi-Fi routers and connection points. Possibly to help give the Nest Wi-Fi ecosystem a more affordable entry point, we have found evidence that suggests Google may release some $99 Nest Wifi hardware later this year.

While this might not mean during the Pixel 5 launch event, we can’t explicitly rule out a mention for this upcoming Wi-Fi hardware product. It might even get a mention with a release date further into the future.

One product we can say almost certainly won’t be making an appearance for another year at the Pixel 5 event is the long-rumored Pixel Watch. Is Google actively working on smartwatches? Well, the drawn-out acquisition of the Fitbit does hint that we could see some Google-branded wearables in the future. Has Google intended to launch first-party smartwatches before? Definitely. Has there ever been a Pixel Watch? Not yet! Will this be the year that Google finally decides to take on the Apple Watch head first? We’re pretty sure it won’t be.

How will the Pixel 5 launch event take place?

2020 has proven to be a difficult year due to the spread of COVID-19. As official launch events, conventions and keynotes have been canceled, this had given way to online-only premieres of the biggest products. The Pixel 5 launch is set to be an online-only affair, with a livestream taking place for fans on September 30 at 11 a.m. PT.

We’re under a week away from the official announcement of all of the expected products at the Launch Night In. You’ll have to stay tuned to 9to5Google for more information on all of the hardware and software developments during the Pixel 5 launch event. Do you have any predictions of your own? Be sure to let us know down in the comments section below.