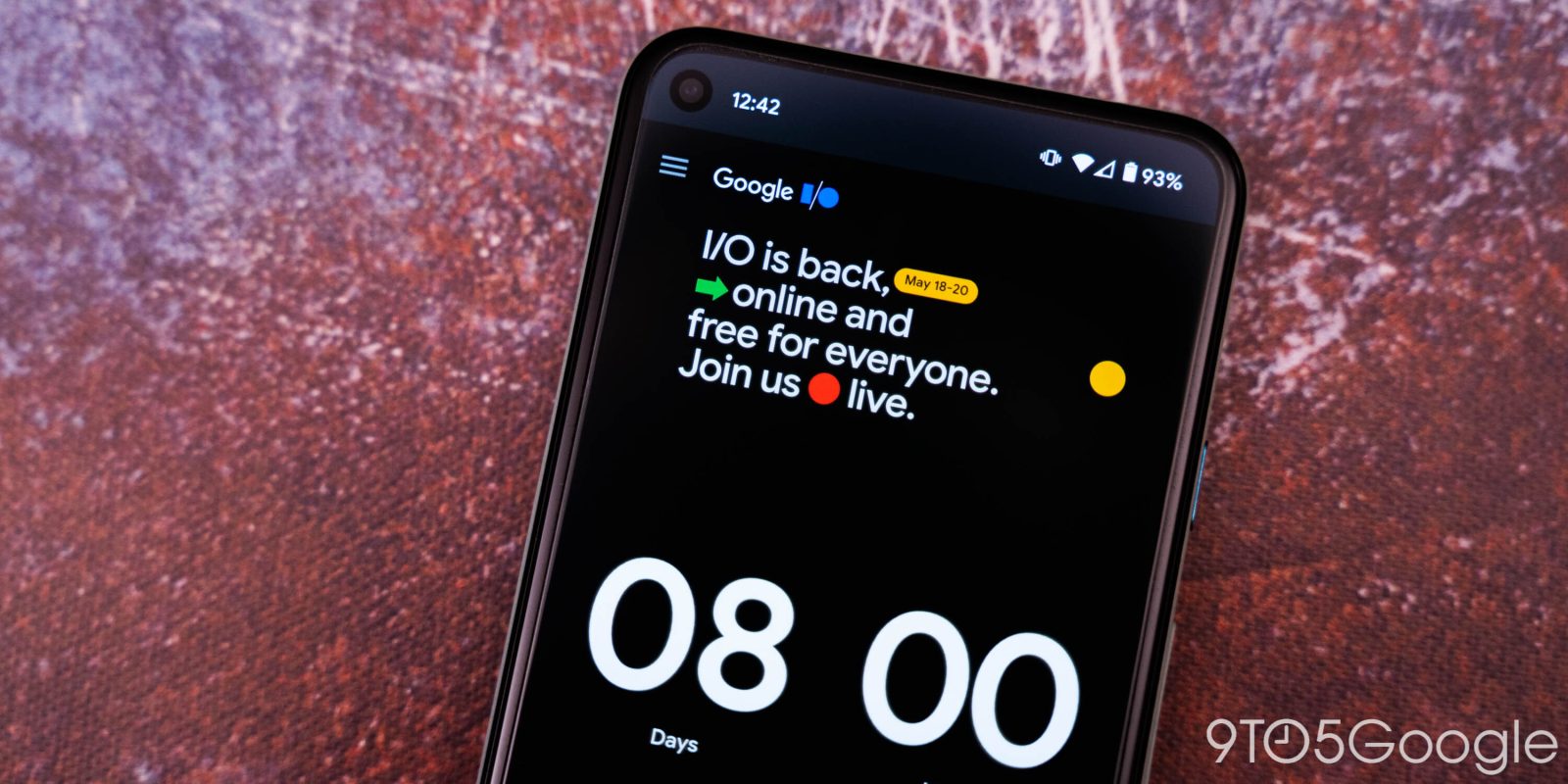 While I/O is predominantly a developer conference, the kickoff keynote is Google’s biggest opportunity every year to show off new consumer services and products. After skipping a year, Google I/O is back for 2021. Here’s our preview of what we expect the company to show off next Tuesday.

Alphabet/Google CEO Sundar Pichai last month told us to expect “significant product updates and announcements” at I/O 2021. It’s been two years since Google held a large event, with 2020 seeing more focused ones from the Android and Cloud teams.

The two-hour keynote allows varying products and ideas from across the company to be announced side-by-side and benefit from being unified under one theme. This year’s description for the main event is just Google’s mission statement:

Tune in to find out about how we’re furthering our mission to organize the world’s information and make it universally accessible and useful.

At the top of our Google I/O 2021 preview is Android. The new version this year is widely expected to bring a massive visual overhaul to the mobile OS after years of iterative UI refinements and continual functionality additions. With this new design, the various parts of Android should fit better together and feel more cohesive. Meanwhile, revamps help keep things modern (and futuristic) while Google gets an opportunity to simplify and refine existing concepts. As such, we don’t expect Android 12 to get too many new capabilities.

That revamp should go hand-in-hand with a new iteration of the Material Design language for first and third-party applications to adopt and match the system. Fast adoption is very important to make sure the OS and apps feel cohesive.

Material Design launched at I/O 2014 with “cards” being the primary metaphor and a sense of depth that moved with accurate animations. Material Theme was announced four years later to provide more support for theming (through colors, typography, etc.) so that developers can better distinguish their apps. What’s next for Material should be announced next week. Early signs of that include:

Assistant was announced at I/O 2016, and every year since has seen major announcements. With no developer conference in 2020, the smart assistant saw various updates over the course of 12 months from the light bar phone UI to better settings and a Snapshot feed, while there was a big focus on controlling Android apps with your voice. Driving Mode only started rolling out in recent months, while Ambient Mode exists on some third-party devices.

On the smart home front, the Routines creation process was redesigned, Home & Away introduced, and Scheduled actions were added. There was also a focus on family-friendly features like a Bell schedule, expanded Broadcast, and Family Notes, while the Smart Display UI was thoroughly revamped.

Despite a flurry of changes, there has yet to be a major core Assistant update. One in that vein came last week when Google announced that Assistant is now leveraging BERT for improved context understanding. That development, which would have been a great on-stage demo, was surprisingly not a Google I/O 2021 unveil. That hopefully leaves the door open for even bigger announcements.

One would be the new Google Assistant launching on Android devices besides the Pixel. When it was announced two years ago, Google positioned on-device speech processing as allowing for a new way to navigate your phone with just voice. That vision hasn’t really taken off, given that the NGA is not too integrated with most apps. It allows you — at best — to get into apps quicker, but people are not really forgoing taps in favor of pure voice interaction. This might change with broader availability — if not different, non-smartphone form factors entirely, but it’s somewhat surprising that this technical achievement has yet to launch widely.

Meanwhile, Google has spent the past several months working on an Assistant “Memory” feature that supercharges bookmarking and reminders. I/O would provide a high-profile launch that raises awareness and adoption.

Those big announcements usually come in the form of Google Duplex. At I/O 2018, Google announced Duplex as an extension of Assistant for phoning in restaurant reservations and salon appointments. A year later, Duplex on the web was announced to extend that principle of having computers handle tedious, multi-step tasks on your behalf, such as ordering movie tickets. Over the last year, Google has ramped up the technology for confirming business hours and no-contact delivery availability. An update on this effort to have “truly natural-feeling conversations with machines” is inevitable.

Duplex-level announcements are signature I/O moments that reflect Google’s lead in AI and ML. There’s usually one per conference that filters out to the mainstream.

If Assistant is Google’s present, Lens is the future. The visual search tool was also announced at I/O. In 2020, it was redesigned to look like the Google Camera app while gaining a new filter/capability for Places and Homework, as well as the “copy to computer” shortcut. Google has also made it more widely accessible throughout Android.

We’ll likely see more Lens features next week, but while it is one of Google’s most consumer-facing augmented reality offerings today, it does not seem to be that widely used. Recognizing objects without having to search is useful, while being able to copy text through OCR is similarly helpful and a time-saver. However, many people just don’t think to use or know about Lens as the phone form factor — compared to what will come in the future — is just not camera-first. Maybe Lens will eventually get a breakout feature on mobile, but it would be ideal if Google finds one sooner than later to cement its position in AR before those ready to announce hardware take the lead.

What we won’t be seeing at I/O is talk of Google’s AR platform on glasses. There is so far no indication that ARCore is ready to expand beyond phones. We’ll likely just see more tools and features for developers to add augmented reality experiences into mobile apps. A form factor surprise would be highly welcome, though:

This month started with the surprising introduction of Gboard for Wear OS. It’s the first major app that Google has brought to its wearable platform in quite some time. That announcement teased more and comes as Google will be pushing third-party developers to support Tiles. Last fall, Google teased Android 11 for Wear OS, and we’re due for an update on that effort, though all recent feature additions have been made above the underlying Android version. Ultimately, for all the possible software announcements, the future (and success) of Wear OS comes to having competitive hardware.

We already know that Google’s next wireless headphones are the Pixel Buds A-Series. Given the number of leaks, a launch is imminent, and Google I/O 2021 is the most likely launch event. That said, one product launch is likely not enough to fill the segment, and we expect there to be at least a few software announcements.

For example, Stadia could finally come to the Chromecast with Google TV as it’s expected in the first half of 2021. We’re also waiting for the ability to use the Nest Audio as TV speakers with the dongle. This could also be when the Google TV phone app gains a virtual remote control.

Google has teased a line of new Nest Cams in 2021, but the traditional fall Made by Google event is a more likely opportunity. Similarly, Google said the Pixel 5a 5G would launch in a timeframe similar to the 4a last year. We are still far off from August, and it would not make sense for Google to pre-announce now and wait three or so months to ship it. This would dampen sales of the Pixel 4a 5G in the US and Japan.