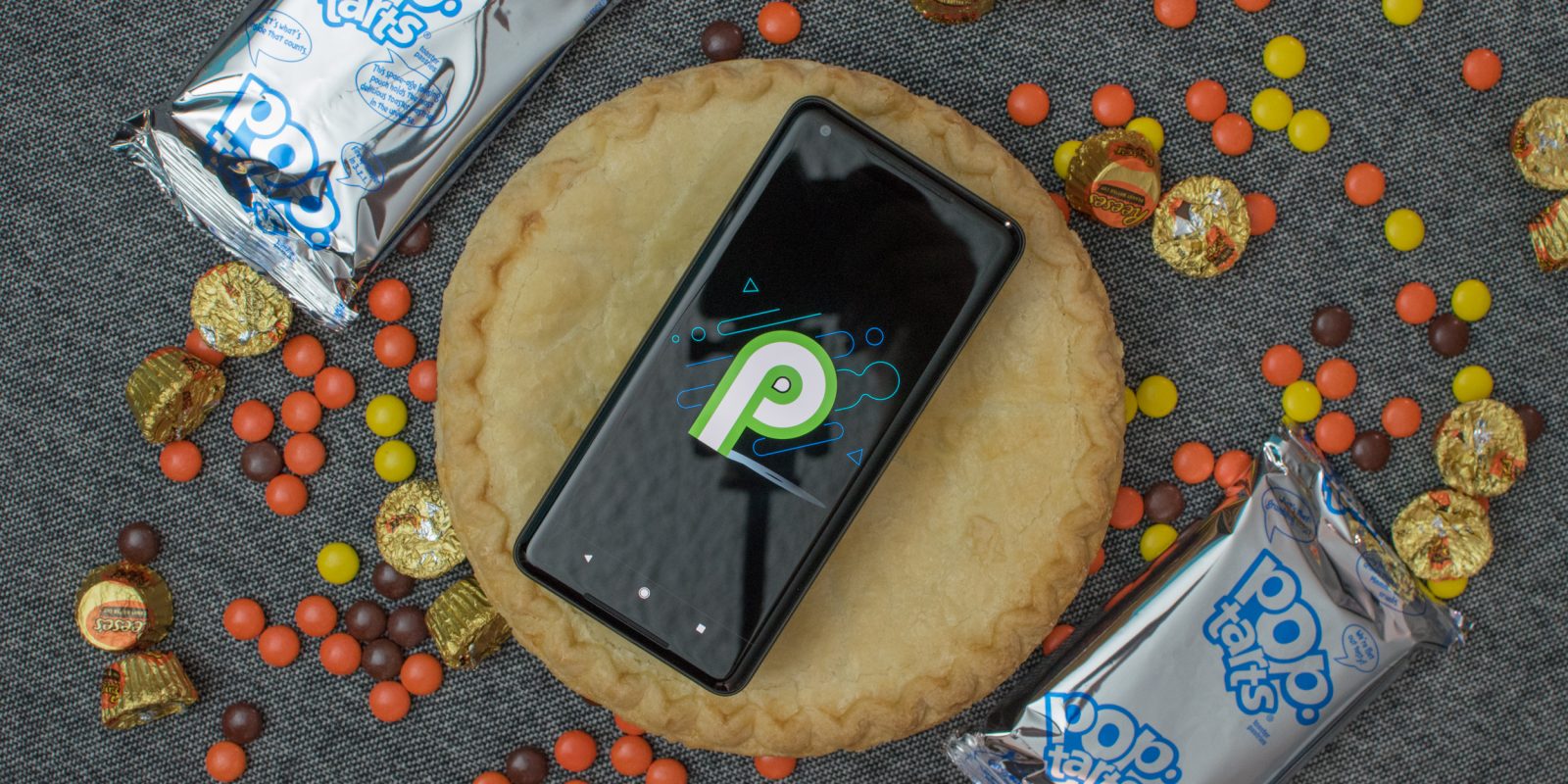 Google announced the Android P Developer Preview this morning and it’s shaping up to be a big update with numerous functional and visual changes. We’re installing the factory images right now to explore the latter, but in the meantime catch up on all the new app features with our updating (reverse chronological) list below.

As we dive into Android P DP1 over the coming days, we’ll post new features and changes we find underneath. (The newest updates will be at top of the list.) For the full list of more developer-focussed changes, be sure to check the very bottom of this post.

Like Do Not Disturb, Location settings have also been simplified in Android P. As spotted by Android Police, users can no select from High accuracy, Battery saving, or Device only. There is only an on/off toggle. 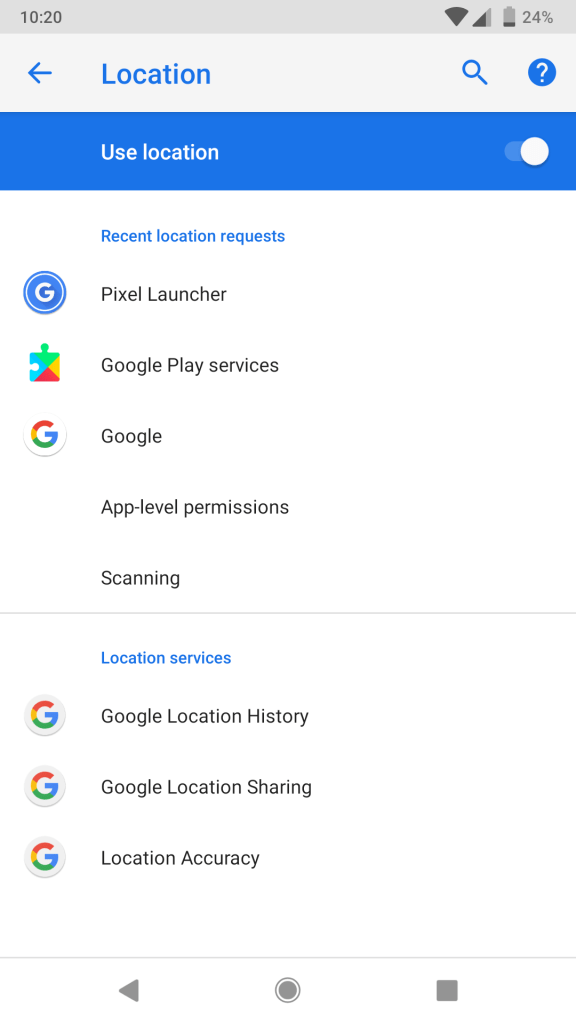 Notification settings in Android P add a new “Recently sent” section (via Android Police) that notes when an app last sent an alert. Unforunately, this list only displays three or so entries, but it does feature convenient toggles for disabling notifications. The time stamps are not available on the “See all apps” list. 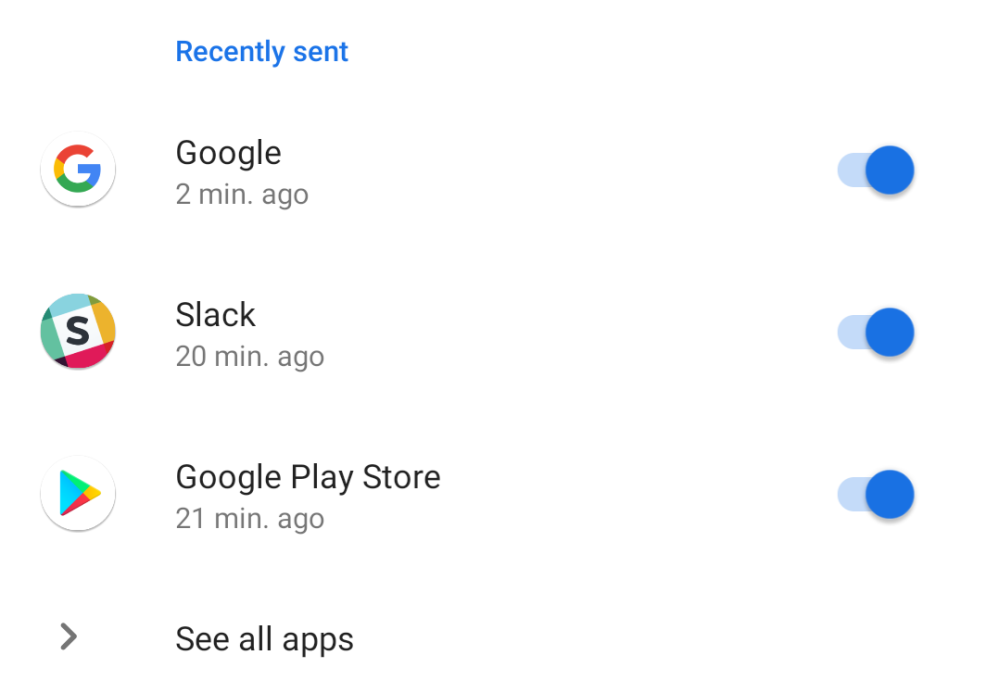 Rotation even with auto-rotate disabled

Android P renames portrait mode to rotation lock, with the new feature allowing for screen rotation even when auto-rotate is disabled through a new navigation bar icon. 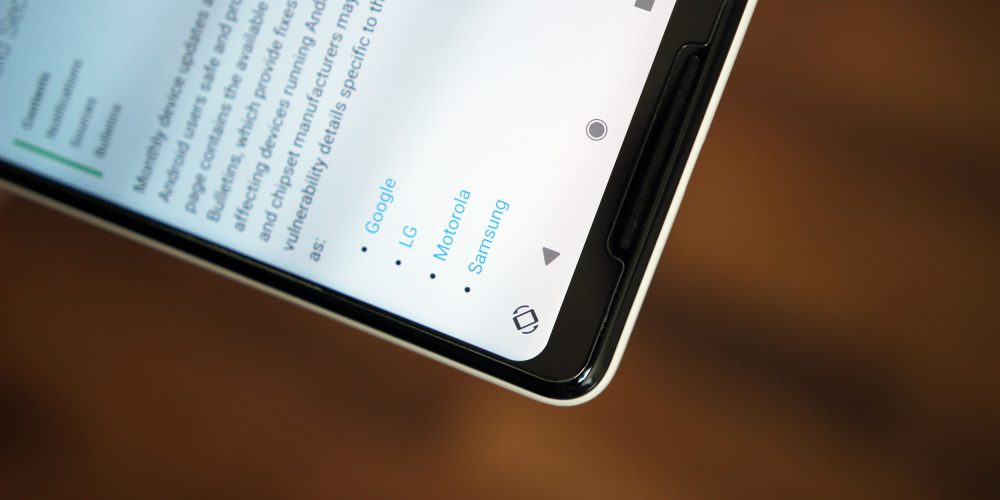 For those who need to zoom in on a portion of text, Android P has a new magnifier tool. 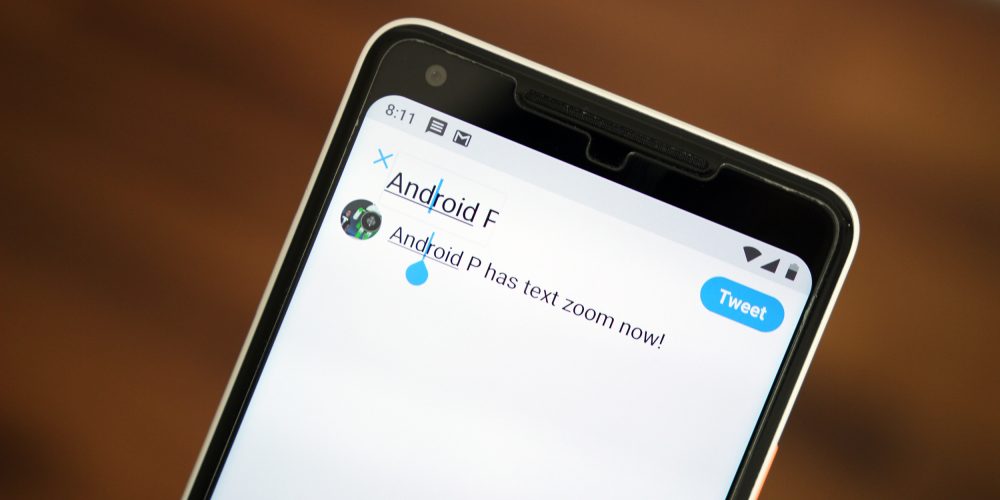 As a likely safety measure, the swipe unlock method now hides its trial rather than leaving up until the full “password” is entered. 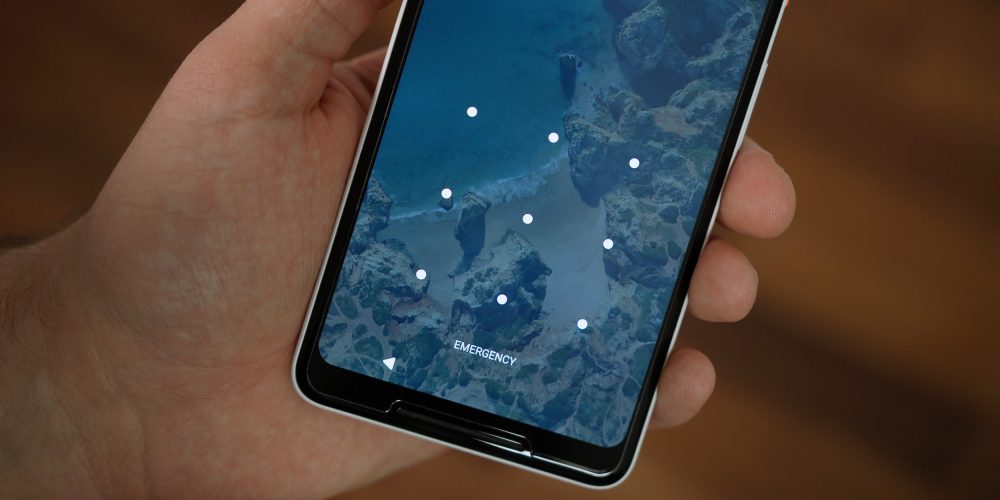 Simplified Do Not Disturb mode

Before Android P, Do Not Disturb settings with quite granular with modes like Total silence, Alarms only, and Priority only. In this developer preview, those modes are gone with only a single DND option available.

Users are able to customize with a “Behavior” menu under “Do Not Disturb” in Sound settings. These preferences include whether they receive Alarms or Calls, with other options like allowing Repeat callers and system feedback. Meanwhile, due to the lack of expandable quick settings, users are presented with a pop up.

Vibration when pulling down notification drawer

On the Pixel 2 and Pixel 2 XL, we’ve noticed that pulling down the notification drawer invokes a small vibration. If inconvenient, users can disable this by disabling “Vibrate on tap” under the system Sound settings.

A small change to picture-in-picture adds a gear icon to the top-left corner of all windows. This shortcut opens system settings and allows users to disable the PiP permission for that app.

Android P retains the same general Settings design that Google introduced with Oreo, but adds colorful icons for each section. Within several menus (like Wi-Fi), preferences have been rearranged, while seveal other settings are entirely new, like Feature flags for enabling in-development functionality. For more, read our hands-on post on the app. 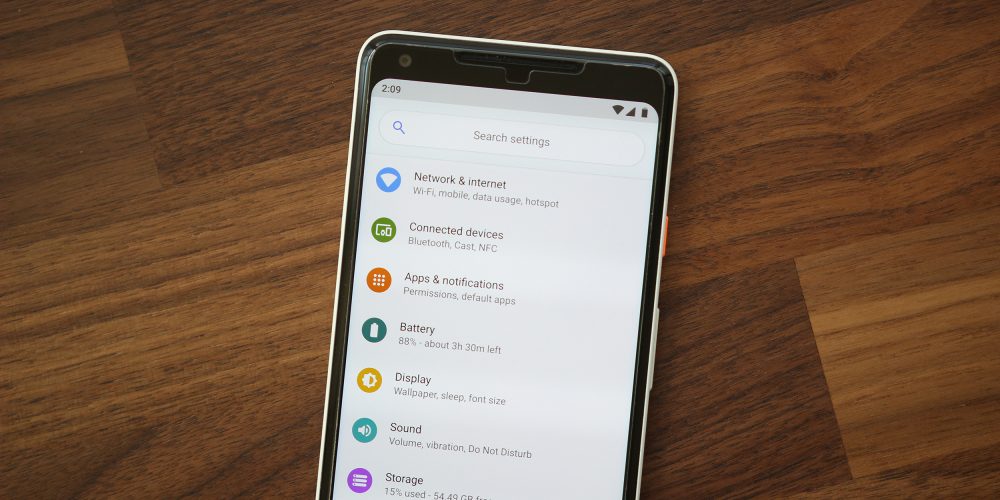 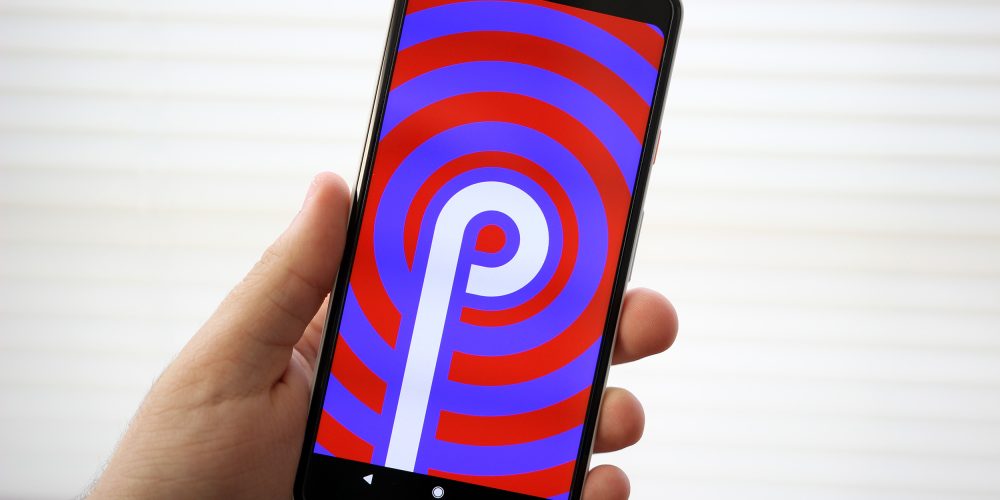 With Android P, the Pixel 2’s Always-on Display adds the battery percentage at the center bottom of the screen. Meanwhile, another tweak (which is also found on the lockscreen) truncates the day instead of displaying the full word. 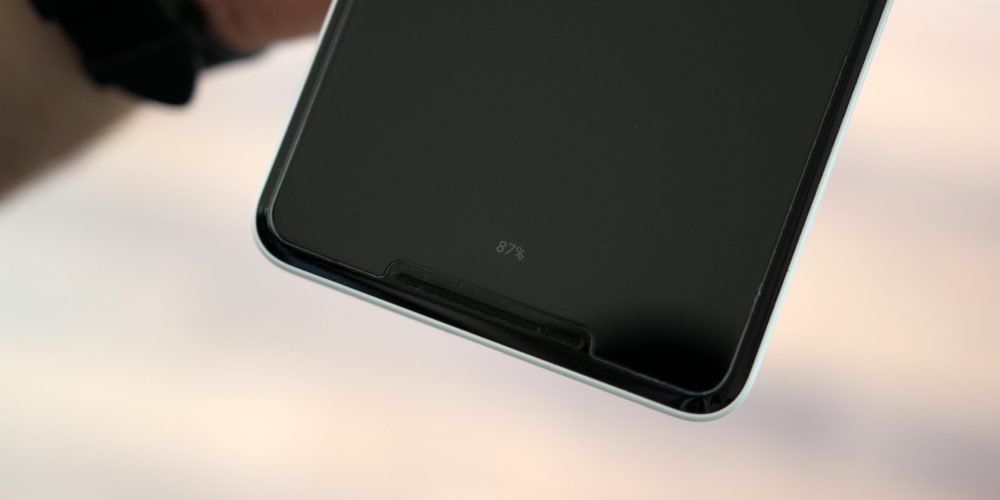 Notifications gain another revamp in the latest version of Android with P focusing on visibility and increased functionality. This includes the ability for notifications to show conversations, photos, stickers, and smart replies, like Google’s new Reply app.

The quick settings panel has equally been redesigned with rounded icons. For a more in-depth look, visit our hands-on post. 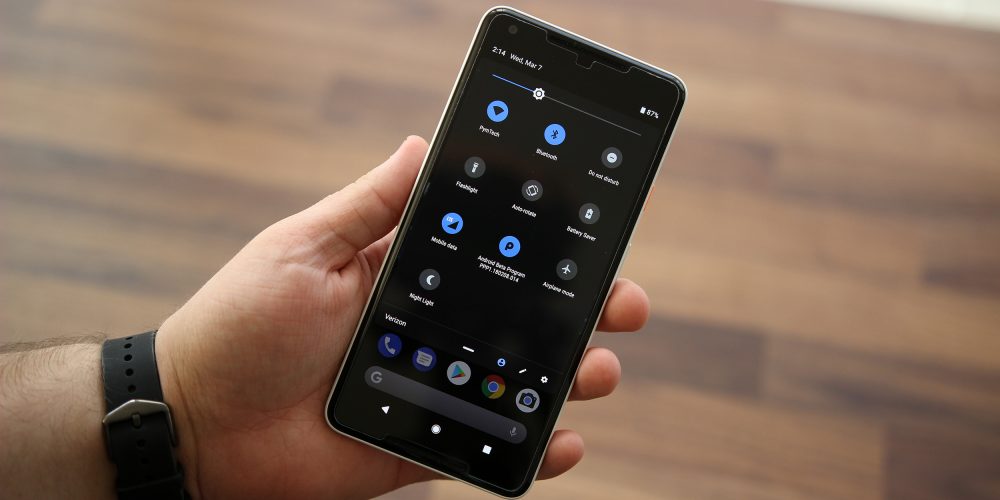 Time moved to the left side of the status bar

Similarly placed to the vertical volume bar, there is a new virtual Screenshot shortcut. Accessed by holding down power/lock, the button appears just underneath Power off and Restart. The resulting screen is similar to the physical button combination with the full status and navigation bar captured.

The volume bar in Android P no longer pops up at the very top of your screen. Rather, it occupies the same space as the Power menu introduced in Android 8.0/8.1. On Pixel devices, this now vertical slider is physically right next to the actual volume buttons.

Above the slider is a menu to adjust media output when headphones are paired, while underneath are toggles to switch between Ring, Mute, and Vibrate only mode. For more, read our hands-on post. 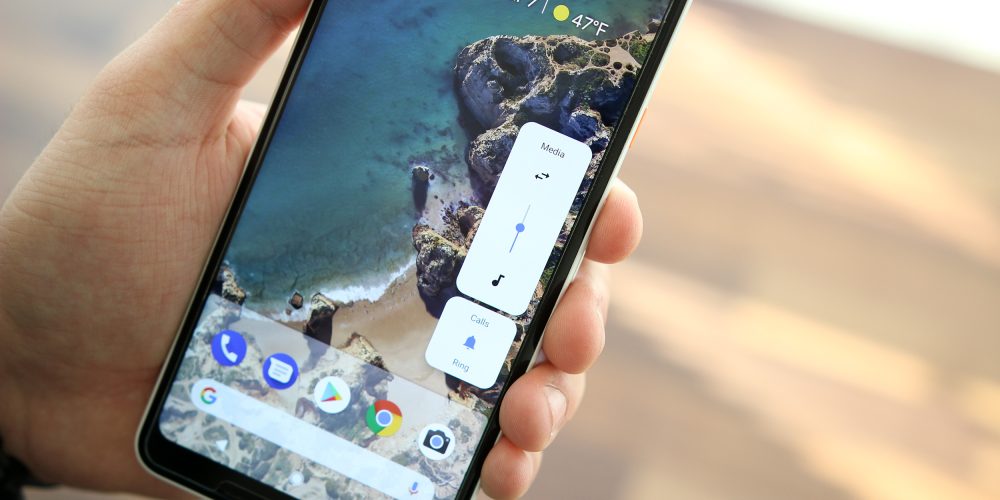 The Pixel Launcher receives a minor tweak in Android P so that the dock is no longer completely transparent. This new shading extends from the navigation bar up to the new rounded corners of the dock. Meanwhile, the search bar adds a microphone icon at the very right that opens Google Assistant. The Essential Phone kicked off the notch trend last year, with many more OEMs rumored to follow throughout 2018. Android P will allow apps to take full advantage of these unique displays, with Google “managing status bar height to separate your content from the cutout.”

Apps can call getDisplayCutout() to determine whether a device has a cutout, with .DisplayCutout determining the location and shape of the cutout area. Meanwhile, the new window layout attribute layoutInDisplayCutoutMode tells the system how and when to lay out content relative to the cutout area.

Meanwhile, a new Developer Option simulates a cutout on any device.

Given the rise of multiple cameras on phones, Android now supports access to simultaneous streams from two or more physical cameras. A new API creates a fused camera stream that automatically switches between two or more lenses. This allows for seamless zoom, bokeh, and stereo vision features.

Privacy-wise, only the device can determine distance, with three or more APs able to calculate accuracy to within 1-2 meters. This allows for in-building navigation, fine-tuned voice controls like “Turn on this light,” and location-based information, “Are there special offers for this product?”

Password manager apps will benefit from an improved Autofill Framework with dataset filtering, input sanitization, and a compatibility mode. The latter allows password managers to use the old accessibility-based approach in apps that don’t yet have full Autofill support, without performance or security impacts.

Android P makes the fingerprint security experience more consistent with a standard system dialog that prompts users to touch the sensor and manage text and placement.

When idle, an app’s microphone, camera, and sensor access are restricted.

While your app’s UID is idle, the mic reports empty audio and sensors stop reporting events. Cameras used by your app are disconnected and will generate an error if the app tries to use them.