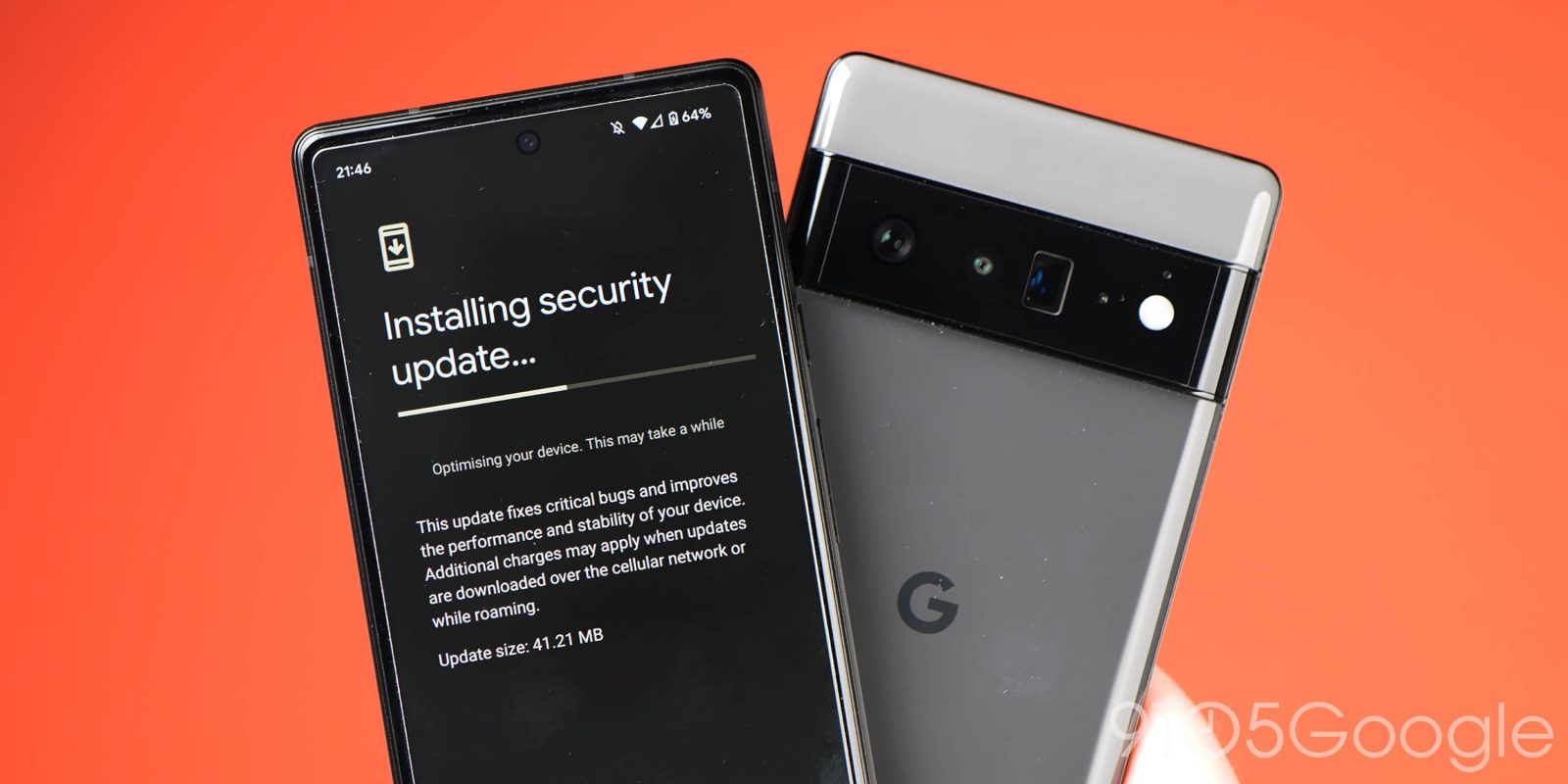 Sadly, the regular December update for the Pixel 6 and 6 Pro introduced a laundry list of issues and problems, which meant a later than usual January patch to resolve some high-level and a ton of low-level issues frustrating owners. Has this OTA update fixed things though?

Firstly, it’s hard to know just what went wrong with the initial December 2021 update for Pixel 6 series smartphones. It’s also tough to argue with the general consensus that Android 12 hasn’t been the most stable of updates. Sure, it has worked fine for many people, but even towards the end of the public-facing beta, things were a little rocky and it felt quite unfinished in many areas.

No smartphone launch is perfect, but when the Pixel 6 series was sold to us as a return to the flagship space after a modest Pixel 5 release, software and device hardware problems have tarnished the post-launch period. There are some lucky folks with no issues out there, but for anyone frustrated and annoyed, let’s take a deeper dive into just what has been resolved with the latest Pixel 6 update.

What issues have people encountered?

A short summary of every single issue or problem that was introduced, exacerbated, or triggered by the December 2021 update probably isn’t possible. There has been a high volume of complaints in the time since the patch was pushed then pulled. To say it has been rocky is an understatement.

Despite the laundry list of problems, there were a few more “common issues” that Pixel 6 owners would see. These include connectivity issues, dropped calls, the removal of certain Pixel-exclusive features, and general UI problems. The January patch for the Pixel 6 series addresses over 80 specific problems, but as is often the case, some more “minor” problems can take a while to rectify once the “major” device-breaking bugs are resolved:

Arguably the biggest problem facing Pixel 6 owners with the borked December 2021 patch has been poor call reception, signal strength, and dropped calls. Certain carriers appeared to be more prone to issues, whether that is related to bands or just calling settings is unclear.

Sadly, for some people, this made the Pixel 6 and 6 Pro almost unusable on some networks, including for some Three UK subscribers. Signal level can also randomly drop, and disabling features such as Wi-Fi calling helped resolve the problem for some people.

Almost exacerbating the poor signal Wi-Fi connections for some Pixel 6 owners have been prone to dropouts and disconnections randomly. Wi-Fi calling can also sometimes fail, which is related to poor Wi-Fi connections. Sometimes connections will drop out after your phone has been in sleep mode for a long time or when reconnecting to Wi-Fi after using mobile data.

It’s no secret that the Pixel 6 and 6 Pro’s in-display fingerprint scanner is very slow compared to the rest of the industry. That’s an objective fact, but it’s the reliability that has proven to be less than desirable. The very first update for the brand new smartphone duo helped somewhat, but this optical reader has problems with screen protectors, wet or greasy fingers, and overall isn’t the best out there.

The Pixel 6 Pro has been most prominently affected by screen flicker issues, but luckily this is due to software rather than being a display hardware issue. When pressing the power button when your phone is fully powered off, there could be a screen flicker or artifacting on-screen before your device fully powers on. It doesn’t occur again when the phone is fully powered on but it’s a disconcerting occurrence that would be worrying to anyone seeing it for the first time.

Loss of Hold for Me and Call Screen

A bug within the ill-fated December update was the reason that Call Screen and Hold for Me were temporarily disabled by Google. The bug was unspecified, but to lose two core selling features sold to prospective Pixel buyers and existing owners is quite frustrating, to say the least.

Complaints about the auto-rotate feature grew as the December patch started seeding to owners – before being pulled. The only solution was to reboot devices to get the automatic rotation to work correctly again.

More prominently experienced on the Pixel 6 Pro, the auto-brightness settings could sometimes behave oddly and erratically by adjusting in strange increments. A temporary fix is to disable the adaptive brightness mode, but this has caused some weird quirks and odd behavior in mixed lighting conditions.

Some complaints stemmed from slow app openings. A good example is with the Google Camera app, which can hang from the lock screen when using the power button double-tap quick launch gesture.

When activating picture-in-picture mode with certain apps, the floating video player could sometimes have rendering issues and wouldn’t work correctly.

What has been fixed?

It’s hard to accurately assess some of the less quantifiable software fixes such as general battery life and power consumption – given the inherent usage differences from person-to-person and device-to-device. There are a number of concrete solutions to ongoing Pixel 6 problems courtesy of the January patch:

At the very least, it appears that the January patch has resolved many of the cellular and Wi-Fi connectivity drop-outs that many people have experienced. This is unrelated to the quite scary emergency calling problem that was caused by Microsoft Teams – and has been resolved already.

The January patch for the Pixel 6 appears to boost the overall speed and responsiveness of devices, with notable improvements to app opening times and stability boosts for the display refresh rate. A prime example of app opening time decreases is with the Google Camera when using the power button double-tap gesture.

While anecdotal, the display on Pixel 6 appears to stay at 90Hz much more consistently with no hangs at 60Hz. The result is a smoother experience across supported apps and games.

The picture-in-picture problems also look to have been resolved as apps that support the feature such as Netflix, YouTube, Twitch, and more work just fine without any problems.

A huge complaint on the Pixel 6 and 6 Pro has been the slow in-display fingerprint scanner, and while the speed is not a major jump here, the reliability appears to have improved quite markedly. No, the update does not suddenly make the Pixel 6 reader as fast as the best in the industry. It does appear to have improved the rate at which your finger or thumb is recognized – even with a screen protector attached.

Hold for Me and Call Screen return

You’re now able to screen calls and have the Assistant handle wait times when you hit a hold line. All is back to normal and these neat Pixel-only features are restored with no issues. If you’re not seeing the options, a restart should fix that, or quickly purging the Google Phone app cache can bring both features back.

A nice sneaky addition here was the reintroduction of Chromecast volume controls for all Pixel devices. With the release of Android 12, Pixel phones lost their ability to adjust the volume of an active Chromecast session with the volume rocker. Rather than being a bug, this feature was actually intentionally disabled by Google due to a “legal issue,” which has been presumed to be the ongoing lawsuit with Sonos.

Although there are a few apps missing from the supported list such as YouTube and YouTube Music, for the most part, you’re now able to adjust the cast volume levels with the volume rocker.

You might not have realized that the Pixel Stand 2nd Gen now charges at full speed and works fully with your Pixel 6 or 6 Pro. If you had the December patch already, then you will be wondering just what the fuss is. All of the on-screen controls and added features are now available to all Pixel 6 owners.

What hasn’t been fixed

Frustratingly, the Pixel 6 and 6 Pro still rejects or does not work with some USB-C cables, even after the January patch. Google still lists this as expected behavior on the official support forums for the device duo, so we don’t anticipate a “fix” for this any time soon.

This does mean that you’ll need to spend a little more on accessories or sift through your existing cables to find compatible options for your smartphone.

Sadly, no matter which update is your Pixel 6 is running, the DJI app will not (yet) work with your flagship smartphone. DJI’s solution to this? The drone firm recommends that you “borrow or use another compatible device.”

Software is hard, and it was always going to be a big ask for Google to resolve so many problems with just one patch after such a massive overhaul with Android 12 and then a new chipset for the Pixel 6 series. It’s still not ideal when the flagship Pixel smartphone series isn’t working as smoothly as it should just a few months after launch.

Google’s efforts to resolve the biggest public complaints first means that we’ll likely see some of the smaller issues resolved over the coming months as more patches arrive to fix any lingering performance and software-related bugs. Given how well the Pixel 6 started life and arrived generally to plaudits, it’s hard to argue that this tarnishes Google’s flagship smartphone series and, in many ways, it showcases how well the Android market leader Samsung has handled smartphone update rollouts in recent years.

On top of that, it’s clear that those experiencing problems are not just a vocal minority, and a swift resolution to device-breaking problems has been needed. At the very least, the January patch for the Pixel 6 and 6 Pro doesn’t introduce any new problems nor does it break anything that wasn’t already broken. While we don’t think that some issues are a reason to avoid the Pixel 6 or 6 Pro entirely, it’s not a good look, and those looking at device reliability before purchase would rightly be instantly turned off.

When the tech space regularly champions and lauds Google’s update speed and stability, it’s undoubtedly frustrating that almost all updates since Android 12 have been a little rocky, to say the least. The Pixel 6 and 6 Pro are great products that are being let down by silly software issues, but luckily for Google, there is more than enough time to put things right. It remains to be seen if buyers spending upwards of $600 are willing to deal with problems until things are resolved.

Has the January patch fixed any Pixel 6 problems you have experienced?

You might have seen some big improvements courtesy of the January patch or you are wondering just what all the fuss has been as your Pixel 6 has been flawless. Let us know down in the comments section below what is working or not working for you and if the update has helped.