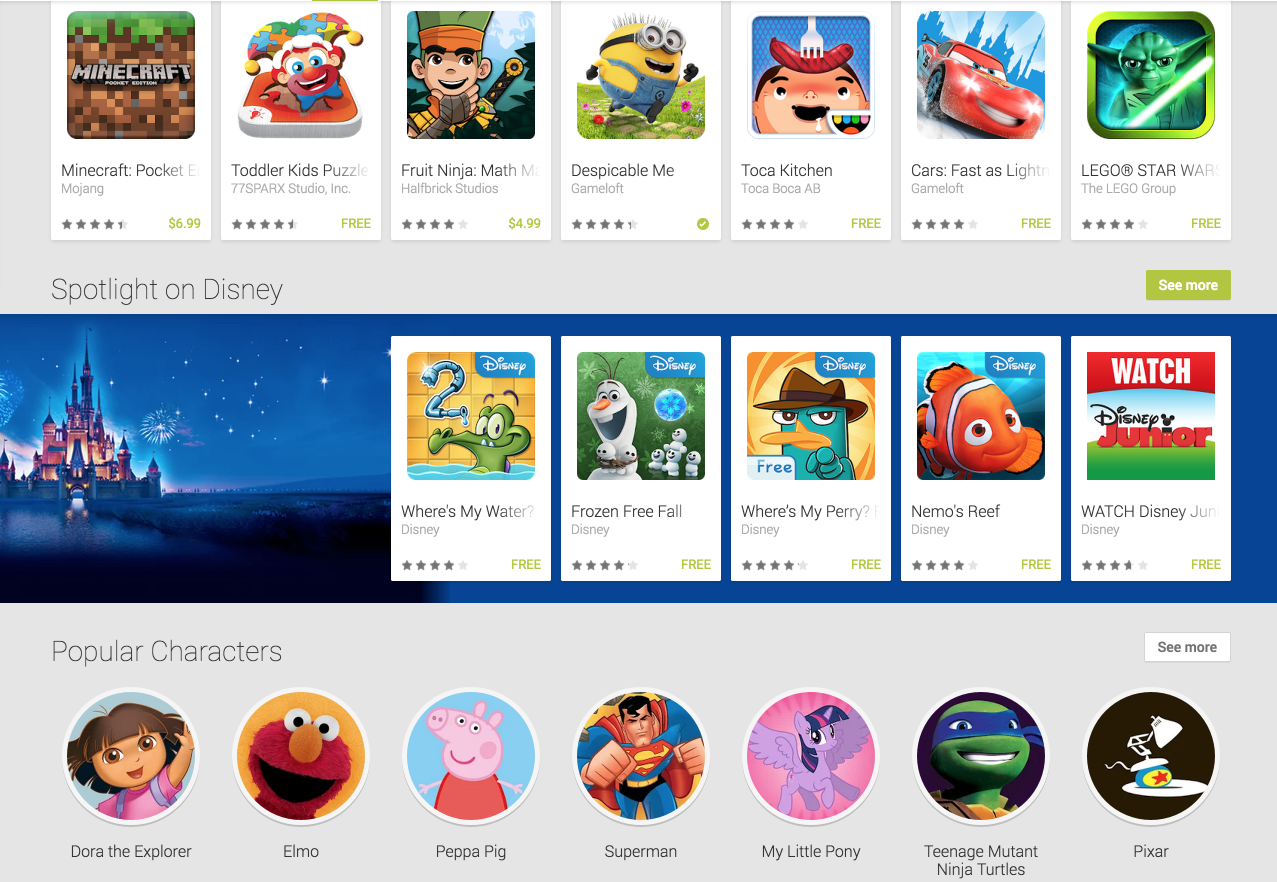 We first heard about Google’s “Designed for Families” Play Store program in mid-May, and Google officially announced that it would be adding new family-focused features to the Play Store at Google I/O 2015. Now, a new section labeled as “New Family Fun” is popping up on the Play Store, featuring the friendly star mascot, iconic character categories, and more… END_OF_DOCUMENT_TOKEN_TO_BE_REPLACED

Multiple wearable devices can be connected to a user’s handheld device. Each connected device in the network is considered a node. With multiple connected devices, you must consider which nodes receive the messages. For example, In a voice transcription app that receives voice data on the wearable device, you should send the message to a node with the processing power and battery capacity to handle the request, such as a handheld device..

The update also brings the addition of nutrition data to Google Fit, as well as “improvements to retrieving the user’s activity and location, and better support for optional APIs, there’s a lot to explore in this release.” Check out the goofy and entertaining announcement video below, and learn more over at Google’s Android developers blog:

Google Maps makes the world a playable game of Pac-Man

Google has started the April Fools Day fun a bit early with a new Pac-Man easter egg allowing users to play the classic arcade game on the streets of Google Maps. Here’s how to do it: END_OF_DOCUMENT_TOKEN_TO_BE_REPLACED

Monument Valley, a popular and critically-acclaimed game that was released recently on iOS, is now available for Android devices. The game, available today for $3.99, features beautiful graphics and an interesting storyline.

In Monument Valley you will manipulate impossible architecture and guide a silent princess through a stunningly beautiful world.

While somewhat expensive for an Android game, Monument Valley is well worth the cost. It’s one of the best games I”ve played on a mobile device in the past year. My only complaint is that it’s relatively short — hopefully now that the game is available on both major platforms, the developers can start adding additional levels. END_OF_DOCUMENT_TOKEN_TO_BE_REPLACED

Google announced today on Twitter that it’s giving away $25 in Google Play store credit & free shipping to everyone that purchases the Nexus 7 through the Play store. That brings the cost down to around the same amount as the $199 deals we’ve seen on 9to5Toys through Walmart, Amazon and others in recent weeks. The deal is only available for those purchasing the Nexus 7 through the Google Play store online in the US and Canada, and the credit will be emailed at the time the device ships.

Also on offer is a free HD movie rental from Google Play with the purchase of Google’s $35 Chromecast.

You’ll be able to find the Nexus 7 for $199 this Black Friday through a number of retailers. Stay tuned to 9to5Toys for all the latest deals.

Earlier today we told you that Facebook had updated its Messenger app for Android with the new “Chat Heads” feature from its Facebook Home platform. Today also marks the official launch of Facebook Home for the initial list of supported devices and now the app is finally live on Google Play and available to download.

Facebook Home is the mobile experience that puts your friends at the heart of your phone. From the moment you turn it on, you see a steady stream of friends’ posts and photos on your home screen. Upfront notifications and quick access to your essentials mean you’ll never miss a moment. And when you download Facebook Messenger, you can keep chatting with friends when you’re using other apps.

In addition to the new HTC First, Facebook Home is currently supported on the HTC One X, One X+, Samsung Galaxy S III, Galaxy Note II, and eventually the HTC One and the Galaxy S4.

You can learn more about Facebook Home from our coverage of the launch event here and check out a gallery of screenshots below: END_OF_DOCUMENT_TOKEN_TO_BE_REPLACED Almost 60,000 apps have been removed from Google Play, reports TechCrunch, in a move believed to be in response to the number of apps falling foul of the store’s anti-spam policies. END_OF_DOCUMENT_TOKEN_TO_BE_REPLACED