Last week images surfaced on the web showing what is likely to be the Google Pixel 3 XL in the flesh, which prompted many concept artists to imagine what the phone might look like in its official marketing material. Now, one of those artists is back with more images, this time showing what the phone would look like if given last year’s color options…

Keep in mind, Google introduced different color variants with the Google Pixel and the Google Pixel 2 line (and the same colors haven’t even been offered on both the non-XL and XL models), so we don’t have any reason to believe that this year’s forthcoming Pixels will actually come in the orange-power-button and nearly-gray color offerings from last year.

But it’s almost certain that Google will introduce the new phones in colors other than just all-black, so at the very least it’s fun to imagine what those variants might be even if these probably won’t be them. The first image (via Twitter) shows what the phone would look like if launched in the “Panda” (Black & White) and “Kinda Blue” variants, alongside the all-black model that the artist mocked up last week. 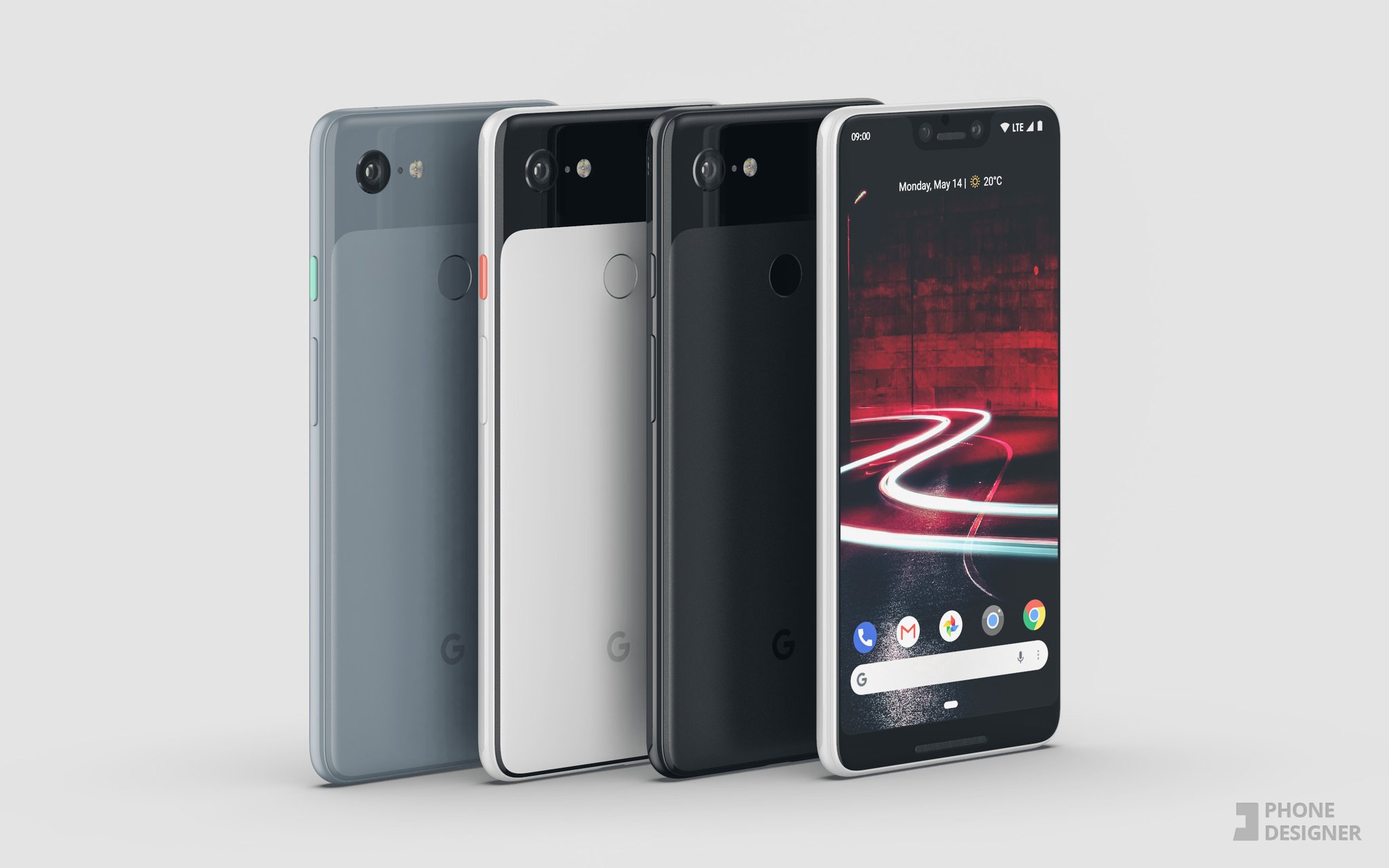 Phone Designer also shared an image they say should be “more accurate” than previous, with what appears to be more natural lighting reflecting off the device’s curves. Rather than posing as obviously-rendered marketing material images, this take seems to try its best to recreate an actual photo of the phone. They also shared an image of all sides of the phone, as can be gleaned from last week’s leaks, compared to the current Google Pixel 2 XL.

The very first details about the Google Pixel 3 and Google Pixel 3 XL leaked late last month, starting with a couple of screen protectors supposedly showing the front designs of both phones. That was followed by reports from Bloomberg and Winfuture that essentially corroborated those images as real, and another report that said LG would produce the XL’s display.

Based on the leaks so far, we can glean that both phones will likely have Snapdragon 845 processors, dual-cameras on the front, a single shooter on the back, dual front-firing speakers, what appears to be a glass back that may support wireless charging, the likely return of Active Edge, no headphone jack in sight, and of course, a fingerprint sensor on the back.

As for internal specs besides that top-of-the-line Snapdragon chip, we know that there’s at least one model with 128GB of storage, and the leaked prototype apparently has 4GB of RAM. Also, according to a leak last week, the Google Pixel 3 XL has a 6.2-inch display, while the smaller of the two will seemingly have a 5.3-inch display.

Given these are based on last week’s flood of images, I’m pretty sold that this artist’s renders will be close to the real thing. Are these the colors Google will ship the phone in? Almost certainly not. But it’s fun to speculate regardless. I’m just waiting for Phone Designer to give us a look at some kind of red or “Really Blue” variant.

What do you think of these renders? What color(s) do you hope to see the Pixel 3 in?