The OnePlus 6T is set to be announced at an official launch event on the 30th October in New York but that hasn’t stopped the leaks, with even the company themselves confirming a series of key features (or removal of them) prior to the unveiling. Let’s delve into all the facts we have ahead of the unveiling later this month for a true OnePlus 6T rumor roundup.

Let’s kick off this OnePlus 6T rumor roundup with what we are banking on being announced. For starters, we know a fair amount about the design. Thanks to some leaks, we’ve seen the OnePlus 6T bears a striking resemblance to the Oppo R17.

We very much expect a teardrop notch — which in my opinion is the best implementation of the ‘feature’ since the Essential PH-1 so far. A teardrop notch takes up much less valuable display space and still manages to pack in that front-facing camera.

We already have in-depth renders courtesy of @OnLeaks and MySmartPrice, with very little left to the imagination. The overall design takes a very minor step away from the, admittedly, solid look of the OnePlus 6. Expect the same glass sandwich design, with a small chin at the front with that minimal notch helping to increase the overall screen size by a few percent. 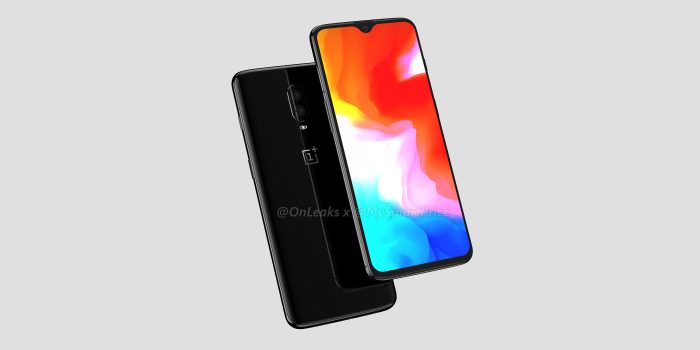 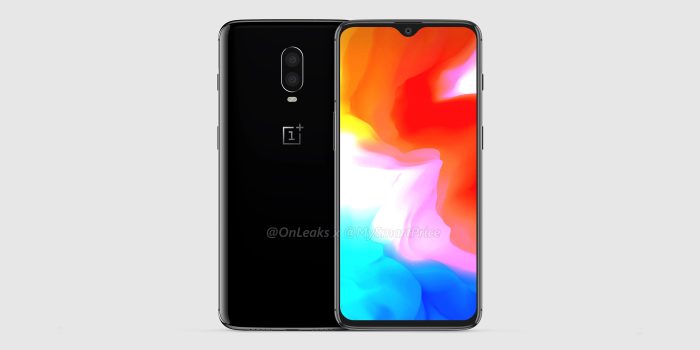 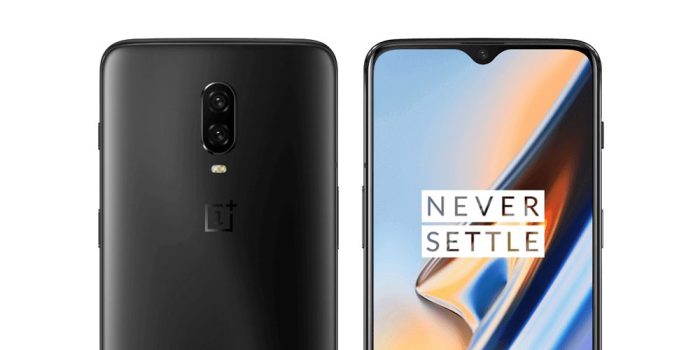 The display is expected to be a 6.4-inch AMOLED screen, a Full HD+ resolution (2340×1080 pixels) and sport a 91.5% screen-to-body ratio. Even with a notch that is an impressive figure. Storage will come in 64GB, 128GB and 256GB flavors, with no mention of microSD card storage expandability. We don’t expect microSD card expansion as this wasn’t present on the OnePlus 6. 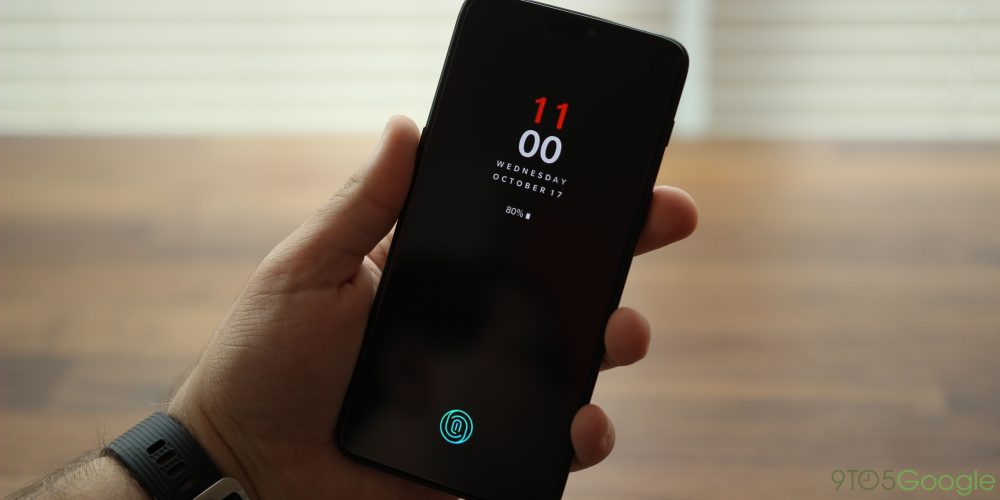 Much was made of the removal of the fingerprint reader initially, but it turned out that the OnePlus 6T will be one of the very few phones available with an in-display fingerprint reader. Even OnePlus CEO Pete Lau confirmed the removal of the 3.5mm headphone jack to accommodate this new technology. We also know that OnePlus is using an optical fingerprint sensor instead of the slightly more accurate ultrasonic option. It will be interesting to see just how well the reader works when compared to a standard reader, we’ll be sure to compare the speeds of the two options come release date.

OnePlus has even sent a less-than-cryptic tweet partially showcasing the introduction of the new feature.

A key innovation lies just beneath the surface. Prepare for the #OnePlus6T pic.twitter.com/yE20Bsy6Dt

It wouldn’t be a complete OnePlus 6T rumor roundup without mentioning what is getting sacrificed from the latest model, and in this instance, it’s the headphone jack. This is most definitely one that hardcore OnePlus fans will likely have difficulty swallowing. It’s a shame that a company labelled as an enthusiast phone maker is removing the feature that fans have shown they love (to Carl Pei no less).

The brand will likely push their own wireless Bluetooth headphones — an upgrade over the original OnePlus Bullets — as a way to appease those that are staunch users of the standard. Ideally, we will see better quality Bluetooth and USB Type-C headphones to help aid the transition. But I’d suggest that existing OnePlus 6 users who love and rely on the 3.5mm jack hold on a little longer.

It’s not a decision OnePlus took lightly either, as OnePlus co-founder Carl Pei explained to TechRadar.

“It [removing the headphone jack] was a very controversial decision. We’re not doing it for the sake of doing it and because everyone else is. We believe now is the right time, as it’ll benefit the majority of our users while keeping the downside low.”

“We knew this was an option for a very long time, we were just waiting for the right time.”

Pei has also confirmed that the removal of the 3.5m headphone jack will accommodate more internal space for a bigger battery, and therefore increased battery life.

“By removing the jack we’ve freed up more space, allowing us to put more new technology into the product,” he told TechRadar. “One of the big things is something our users have asked us for, improved battery life.”

An increase in battery size doesn’t always necessarily mean better battery life, that being said, I’ve personally found the OnePlus 6 to have a solid battery with the 3.5mm jack present so maybe it will make a small difference at the very least. 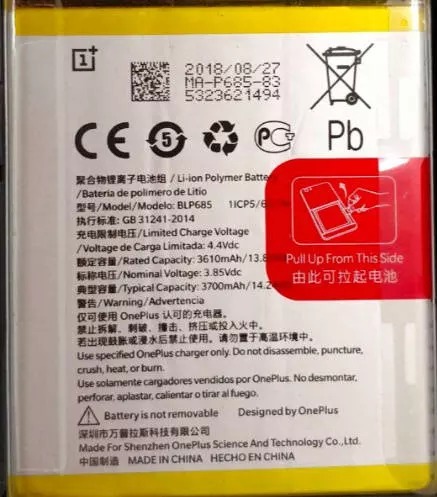 Leaked images of the battery show that it’s set to increase to 3700mAh from the 3300mAh battery found on the OnePlus 6, which is quite a sizeable increase.

No wireless charging or IP rating…yet

OnePlus CEO Pete Lau confirmed that the OnePlus 6T won’t include any sort of water resistance rating or wireless charging. With rival companies managing to pack in both bits of tech, it still seems an odd omission, but most will agree that Dash Charging is a more than fair compromise. It sounds like OnePlus is still hoping to add wireless charging in future models.

“We’re working hard on this,” said Lau. “When we get to the day that the wireless charging can get up to speed without the implication of heat that we expect, then I believe we can integrate the technology.”

As for water resistance, Lau gave his own assessment. “The number of users that are taking their phone to go swimming are few and far between,” said Lau. He added that to force everyone else pay, say, $30 more, “for the sake of an IP rating” for a minor subset of users was “unreasonable.”

The OnePlus 6T will ship with Android Pie right out of the box, which is kind of expected but a bonus nonetheless. The OS has been confirmed via a Geekbench leak that also lists the Snapdragon 845 chipset for this upcoming device. OnePlus love to stack the RAM in their devices, so 8GB of RAM should come as no surprise and offer exceptional multi-tasking performance.

Android Pie on the OnePlus 6 is a refreshing experience. It runs smooth and with the lightweight Oxygen OS skin having only miniscule drag, expect blistering performance from the OnePlus 6T upon release.

According to a listing by online retailer Giztop, the 6T is expected to sell for $569 come release day, whilst CNET reported earlier that the device could ship for $550. That would put the device in a mid-point between the pricing of much more expensive flagships but with similar overall specs for an enticing complete package.

We’re not 100% convinced of that price, but an approximation of $600 will likely see you able to pick up the base model OnePlus 6T. This would make the OnePlus 6T a very savvy option when compared to the $900+ Samsung Galaxy Note 9 or iPhone XS Max.

What we do know 100%, though, is when the phone will launch. OnePlus is hosting an event on October 30th to unveil the phone in New York City. On top of that, we also know that the new device will start shipping on November 6th – just a week later.

Beyond these pretty solid expectations, a few other details are not yet known, including the color lineup. We’d absolutely love to see another Red edition — which was easily one of the best looking colorways on any device in 2018. OnePlus has marketed their devices in the past as ‘flagship killers’ but it’s clear that they are moving away from the enthusiast market and are attempting to head into the mainstream.

Performance will no doubt be exceptional and easily match some of the best phones of the year so far, including the Note 9, LG V40 and many more. We’re interested to see if there are any camera improvements made, as it’s one area where OnePlus devices have lacked somewhat in the past few releases.

What are you most excited to see at the 30th October keynote? Is the addition of an in-screen fingerprint scanner enough to cover the loss of the headphone jack? Let us know in the comment section below.