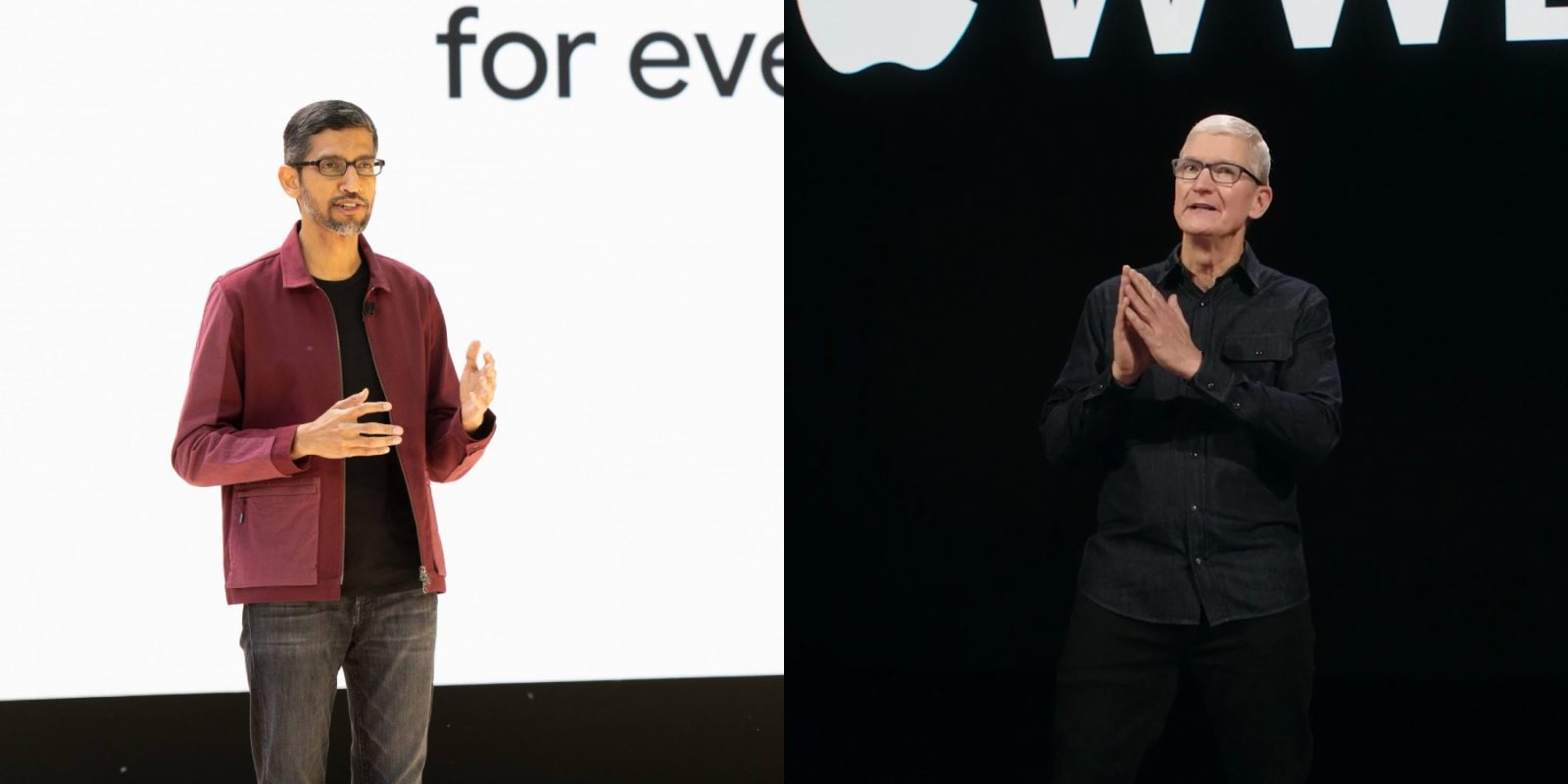 Yesterday, Apple showed off an extensive suite of new software features for iOS, macOS, watchOS, iPadOS, and more. Here’s a rundown of everything Apple showed at WWDC 2021 that was already possible with Google’s apps on Android and Chrome OS.

Before diving into the nitty gritty of Android vs. iOS at WWDC 2021, let’s set down our pitchforks and have the right expectations. Steve Jobs famously quoted Pablo Picasso in saying “good artists copy; great artists steal.” In the realm of tech, ideas are regularly shared, stolen, reworked, and improved – it’s the nature of the beast.

Competitors like Apple and Google — or Coke and Pepsi, or Xbox and PlayStation, etc. — will rightfully build on each other’s successes and failures to ultimately craft better products. For Apple to not “steal” some of Google’s ideas, and vice versa, would leave the companies stagnating rather than growing.

There were numerous things shared during WWDC 2021 that Google has not come close to matching — like Universal Control — but there were also many features that closely resembled things offered in a Google app on Android or Chrome OS.

Of course, the true headline feature coming to FaceTime is its expansion to Windows, Android, and more through a new web experience. Anyone with an Apple device can create a link to a FaceTime call and share that link to anyone regardless of whether they have an Apple device. By comparison, Google Meet and Duo both have native iOS apps, and Google Meet offers a way to create links to pre-scheduled meetings.

Elsewhere in FaceTime, the video app is gaining a handful of “SharePlay” features that let you sync video and music apps together to share the experience of watching something together with friends. One SharePlay feature shown at WWDC was the ability to share your whole screen with others via FaceTime, a capability that almost every other video-calling app like Google Meet, Google Duo, Discord, and Zoom has offered.

iOS 15 also includes some revamps of the notifications system, most notably with the individual notifications getting a redesign that can include a contact’s profile photo or an app’s icon to make notifications more glanceable. All of this works to make iOS notifications look a great deal like Android notifications have since at least Android 10.

Apple also shared new Focus modes for apps and notifications, allowing only a subset of apps and people to bother you while you’re trying to do something else like work, exercise, or sleep. Google’s “Digital Wellbeing” suite for Android offers a focus mode that disables some apps, but this doesn’t offer niceties of Apple’s version like multiple distinct profiles, blocking specific people, and cross-device sync of settings.

At WWDC 2021, Apple took quite a few notes from Google, launching “Live Text” to allow you to copy text from your camera or any photo and “Visual Look Up” to show information about anything you can point your camera at. Both of these have been readily available on Android through Google Lens, as well as some compatibility with iOS through the main Google app.

Spotlight, iOS’s device-and-web search feature, is set to gain “rich results” when searching for people in your contacts as well as well-known things like actors, musicians, and more. Performing a Google Search for a famous person has long returned a “knowledge panel” about that person, but a similar option isn’t quite available for your contacts.

iOS 15 also comes with an upgraded Wallet app that will be able to digitize your driver’s license in some areas. A similar feature was confirmed for Android, though it doesn’t seem to have launched as of yet.

The Weather app is also getting an overhaul with iOS 15, taking the best parts of DarkSky, an app that was available for Android until Apple acquired it and shut down its Android app.

Alongside unique features like customized 3D landmarks, Apple Maps is gaining some familiar Google Maps features like transit directions that launched in 2019 and augmented-reality-based walking navigation.

Toward the end of the iOS 15 portion of the WWDC keynote, Apple briefly displayed a handful of other additions for the platform, with mentions of voice search in Safari — a longtime feature of Chrome — and cross-app drag and drop — an admittedly underused capability of Android.

Apple’s AirPods were also treated to some upgrades shared at WWDC 2021, bringing them up to par with Google’s Pixel Buds and Android in some aspects, while vastly surpassing them with new Spatial Audio integrations.

The new “Conversation Boost,” exclusively for AirPods Pro, is able to amplify the voice of someone you’re looking at. Google offers similar functionality with the “Sound Amplifier” app on Android which is able to boost nearby sounds using any Bluetooth headphones.

The AirPods line is also set to expand its “Announce” feature — which has Siri speak incoming messages aloud — to support all types of notifications. This matches the capabilities of Google’s Pixel Buds line and other Google Assistant headphones like the Sony XM4.

Beyond the additions of iOS 15, iPadOS 15 is set to include a variety of tablet-specific changes. Widgets, for example, will be available in larger sizes, something that Android has long supported, with widgets even being able to take up an entire home screen page if you wish. Similarly, iPadOS 15 is bringing the App Library, accessible from the home screen dock, essentially re-creating Android’s app drawer.

Apple also showed off a new “Shelf” for iPad, which helpfully separates the various windows you have open for a particular app. From what little they showed off, this seems similar in concept to the window switching experience available on most laptop/desktop operating systems including Chrome OS.

The Notes app is also getting a serious overhaul, bringing features like mentions and recent activity — both hallmarks of Google Docs — and hashtags — an organization feature of Google Keep.

Meanwhile, Notes is also gaining Quick Note, a handy way to create a new note at any time on Mac and iPad, complete with contextual awareness of your current app. Chrome OS devices with a stylus have a vaguely similar feature with the ability to create notes from the lockscreen.

Apple is also launching their Translate app onto iPad with this upcoming update, which likely sounds weird to Android fans who are used to their phone apps at least being available on a tablet, even if they’re not always (or even usually) optimized for that larger screen. Translate is getting bolstered with “Auto Translate” that allows your device to simply listen to a conversation, regardless of language, and translate it as appropriate. This brings Apple Translate up to par with Google Assistant Interpreter Mode, available on both Android and smart displays.

The Translate app is also gaining “system wide” translation, meaning any text you can select can be easily translated. This is possible on Android through a “translate” action when selecting text, while Chrome OS offers a similar capability through Google Assistant “Quick Answers.”

The last major addition mentioned during the iPadOS 15 section of WWDC 2021 is an expanded “Swift Playground” that allows you to build apps for iPhone and iPad from an iPad. For comparison, Chrome OS devices — including tablets like the Pixel Slate — can make Android apps using the full version of Android Studio, thanks to Linux apps support.

Apple once again doubled down on privacy at WWDC 2021, offering to keep people safe from trackers around the web with useful tools like “Mail Privacy Protection.” The upcoming “App Privacy Report” for iOS and iPadOS breaks down the way apps use sensitive aspects of your phone like the camera and microphone, which matches Android 12’s upcoming privacy dashboard and exceeds it by listing connections to third-party domains.

Another touted privacy feature of iOS 15 is Siri’s ability to process commands on-device, allowing some commands to work offline, faster, and more privately. This matches the main selling points of the “Next Generation” Google Assistant that debuted on the Pixel 4 and has so far remained exclusive to Made by Google phones.

iCloud’s new “Digital Legacy” feature allows you to set up a list of contacts that will be able to access your data in the event something should happen to you. Google has long offered something like this as a lesser-known part of Takeout called “Inactive Account Manager.” Paid iCloud plans are also picking up a suite of “iCloud+” features, of which “Private Relay” sees Google One’s included VPN and adds a second layer of protection.

While Google has a significant revamp to Wear OS coming up later this year, Apple still has a significant lead in smartwatch innovations. Of the watchOS 8 enhancements announced at WWDC 2021, only two have been done before on a Google-owned smartwatch. watchOS 8’s new keyboard, like the recently released Gboard for Wear OS, offers dictation and access to emoji. Meanwhile, the built-in sleep tracking is gaining respiratory rate tracking, which is available on Fitbit.

During WWDC 2021, Apple showcased new features for the smart home, like asking Siri to play music or movies on your Apple TV, something the Google Assistant can do for any Chromecast-equipped device. Similarly, Siri is becoming available on third-party speakers, something Google has long allowed for the Assistant.

HomePod Minis will soon be able to act as speakers for the Apple TV 4K, which is similar to the promised ability for Nest Audio speakers to connect to the Chromecast with Google TV.

On the home security front, HomeKit compatible security cameras will be able to detect when a package has been delivered, matching the Nest Hello doorbell.

Of course, WWDC is a developer conference, which means there were some announcements for app developers. Alongside impressive things like Xcode Cloud, there were some aspects familiar to Play Store developers. The App Store now allows A/B testing on app listings and in-app events, both of which are also available through the Play Store.