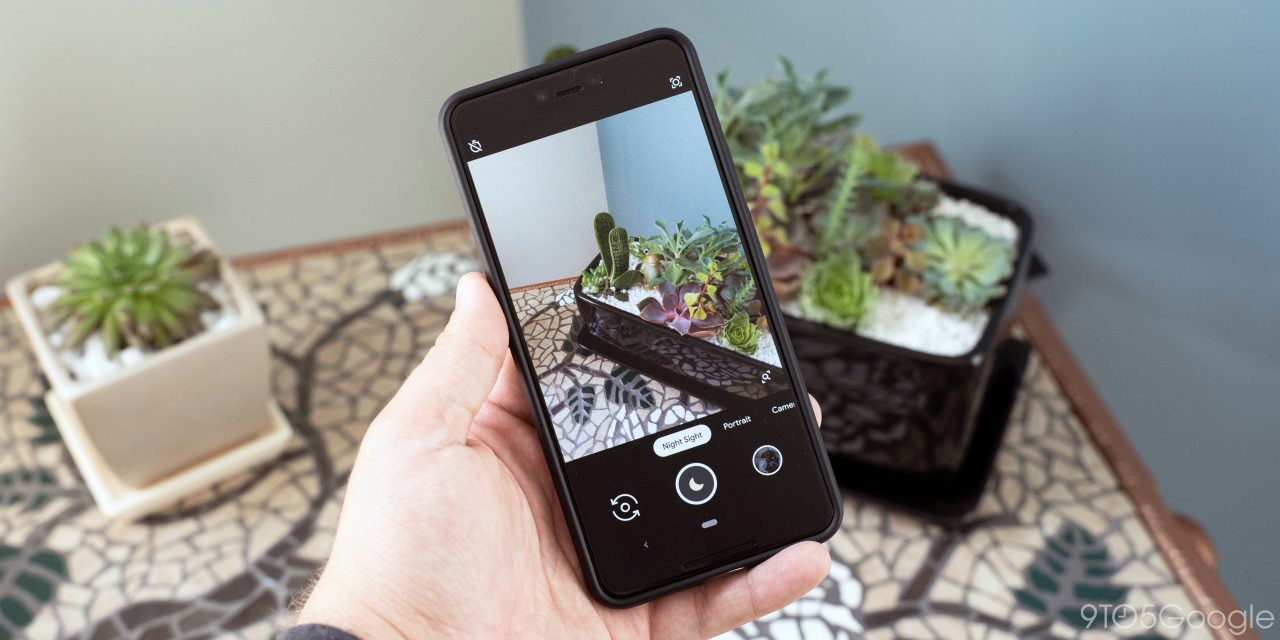 In this week’s top stories: a leaked update to the Google Camera app reveals upcoming features and possible features of the Pixel 4, we uncover “Fast Share” an easy way to share things between devices, we get hands-on with RCS as provided by Google Messages, and more.

Midway through the week, we were able to get ahold of a leaked update for the Google Camera app from an also unreleased build of Android Q. At first blush, this leaked build of Google Camera, version 6.3, is packed with a variety of useful quality-of-life changes for Pixel owners. The most obvious of these is the prominent relocation of Night Sight, the signature feature of the Pixel 3 and Pixel 3a.

This is a big improvement for the Pixel’s best camera feature. Heading to the grid of modes in “More” was tedious, while the blue Night Sight pill could be disruptive and annoying when taking a shot. That said, the suggestion still appears when in the main camera mode.

Our APK Insight team took a look under the hood of the Google Camera leak and found evidence of new features coming to the app like selfie tips, Pixel 4 support, and a new “McFly mode.”

The biggest addition we’ve found in Google Camera 6.3 are the first signs of a new mode, called “McFly.” Between the obvious Back to the Future reference, and mentions of “rewind,” it’s possible this mode will be used to record videos meant to be played in reverse.

Armed with the knowledge of Pixel 4 support, it was also discovered via this same Google Camera update that the Google Pixel 4 may very well have a rear-facing telephoto lens.

[There] appears to be an error message used for debugging the telephoto code, which should return photos with one of a few specific resolutions. From these resolutions, we can calculate that the Pixel 4 may have a whopping 16MP camera sensor equipped with a telephoto lens.

If you’re itching to get your hands on this leaked update to Google Camera, you can actually download and install it to your Pixel phone today.

At the very tail end of last week, we discovered that Google is working on an ambitious new way to share almost anything to almost any other device (including iPhones and Chromebooks), called “Fast Share.” The service will replace the soon-to-be deprecated Android Beam and hopefully give Apple’s AirDrop real competition.

Fast Share on Android can be used to share images and other files on your phone — as well as URLs and snippets of text — “to nearby devices without internet.” It’s available from the system share sheet with the feature currently using Google’s blue diamond-shaped Nearby icon.

Last week, we saw Google Messages begin to roll out its own implementation of RCS in France and the UK, independent of cell carrier. Being a UK resident himself, our Damien Wilde took the opportunity to give RCS a proper hands-on trial and share his thoughts.

One thing that Google has cleverly addressed is the ability to choose on a contact-by-contact basis how your messages and MMS are sent. Within a Chat, you’re able to specify if you want to only send SMS and MMS to that particular contact. This might be preferable if you have no data allowance at all, or are heading to an area where Wi-Fi and data connections are spotty at best.

Overall it is reminiscent of the original rollout of iMessage. It works without too much input. All you need to do is activate Chat features within Google Messages settings.